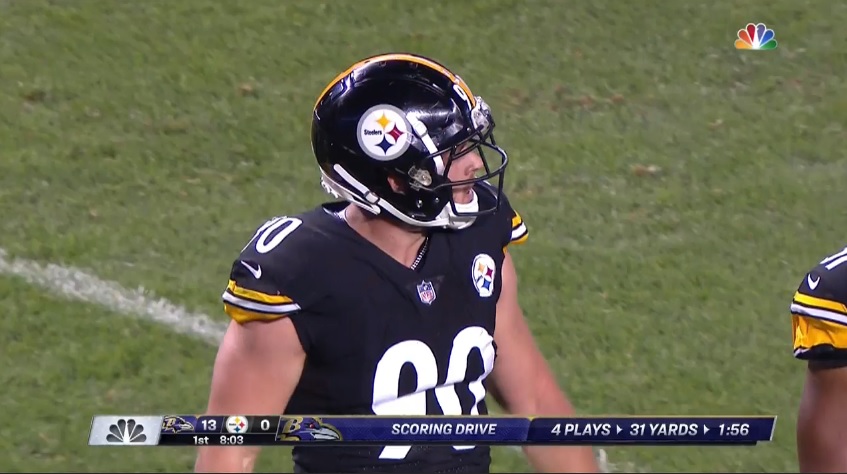 It might be time to start panicking, Steelers fans.

What a dreadful loss that was.

Sunday night’s 26-14 debacle of a loss to the Baltimore Ravens at home on Sunday Night Football has left a sour taste in man fans mouths.  The Steelers are a mess right now, and the outlook for the rest of the year doesn’t look much better on both sides of the ball.

Let’s try and slog through these grades.

A tale of two halves for Ben Roethlisberger, and it couldn’t have come at a worse time.

After a strong first half by Roethlisberger helped the Steelers rally from a 14-0 deficit, the veteran quarterback fell off a cliff in the second half, helping the Steelers offense completely torpedo itself.

Roethlisberger has struggled to be on the same page with Antonio Brown all season long, and that ugly head reared itself again in the second half as Roethlisberger missed Brown on multiple occasions.

On top of forced throws, Ben just stares guys down and still thinks he can fit balls into windows across the middle. It’s just not happening.

He needs to be better, plain and simple.

While it’s not totally James Conner’s fault for the absolute lack of a run game, Conner didn’t bring much of anything to the table Sunday night against the Ravens.

The second-year running back received just 9 carries and gained 19 yards, adding 16 receiving yards on 2 catches out of the backfield. He was fine as a pass protector, but he just didn’t bring much else to the table on the night.

When the run game gets negated like it did tonight early, it makes it that much harder for the Steelers to do much of anything offensively. We saw that in the second half.

This grade isn’t completely dependent on the receiver’s play, considering their quarterback went in the tank in the second half, but this unit has to be better when it comes to creating separation and finding the soft spot in zone coverage throughout games.

I didn’t think so.

It continues to drive me nuts that the Steelers want to get Ryan Switzer so involved offensively, yet they can’t seem to scheme anything up for a guy like James Washington, who they spent a second round pick on. It will continue to baffle me all season long, since they’re treating Switzer like he’s the second coming of Wes Welker.

That’s not a knock on Switzer either; he’s producing when called upon. But it’s pretty apparent the Steelers utilize him on short pass plays, and he’s just not doing much with it after the catch, considering his 7/32 (4.6 yards per catch) line.

There were too many plays left on the field between Roethlisberger and his receivers in the second half, which led to the Steelers’ demise. I’m really not sure how it gets any better.

Vance McDonald continues to be a human wrecking ball, putting up 62 yards on 5 catches Sunday night, including a highlight-reel catch and run in the first half that saw him run over two defenders in succession.

When healthy, he completely changes this offense. It’s been great to see him healthy and producing the last two weeks. Hopefully the Steelers keep it going with him.

The fumble certainly didn’t help matters as the Steelers found themselves in a 14-0 hole, but I really thought McDonald was pretty good Sunday night.

Jesse James added a nice 23-yard catch-and-run over the middle on Sunday night, but that was his only target of the night. With as much success in the middle of the field that the Steelers had on the night, it was puzzling to see them not utilize the tight ends more often.

This group really struggled as blockers though, rarely getting a good push up front to help the struggling running game out.

From a pass protection standpoint, this group was mostly solid, allowing just one sack and two quarterback hits. Statistics can lie at times, but I thought for three quarters the offensive line was solid protecting Roethlisberger.

Outside of pass protecting, this group was awful establishing a run game. There was no push up front, as the Ravens front 7 absolutely dominated this unit all game long. That’s a major concern, considering the Steelers averaged just 1.7 yards per carry on the night (1.8 if you take out Ben’s kneel down at the end of the second half).

The defensive line was about as average as average gets on Sunday night.

Yes, they played well against the run, holding the Ravens to just 3.5 yards per carry on 28 attempts, but there was no pass rush once again, as Cam Heyward, Stephon Tuitt, Javon Hargrave, Tyson Aluala, and Daniel McCullers recorded just one QB hit in the loss.

For all the money dumped into this defensive line, they’d been nonexistent the last few games. Maybe they’re still adjusting to a new position coach in Karl Dunbar, maybe not.

I’m just not sure how they get back on track. There’s not winning individual matchups right now. That’s on them.

Once again, Jon Bostic and Vince Williams had strong games. Sure, they’re not the best in coverage, but they held their own, and came downhill with force against the run, helping the Steelers slow down a strong Ravens run game.

Combined, the two inside linebackers recorded 18 stops in the loss. Not much more they can do.

I know Bostic isn’t Ryan Shazier, but he’s been a very good addition to the defense. He’s underappreciated by Steelers Nation.

Outside, is TJ Watt alive? The guy can’t seem to win one-on-one as a pass rusher, getting shut down all game long by James Hurst of all tackles. He’s uncomfortable in coverage and just gets swallowed up as a rusher. He needs to get going again for this defense to have a chance.

I thought Bud Dupree had a good game. Yes, he recorded just one tackle — a sack that he came free unblocked on — in the loss, but he was constantly in the backfield pressuring Joe Flacco throughout the night. He seems to be figuring things out from a pass-rushing perspective.

On special teams, I thought LJ Fort was very good, recording four stops for the Steelers. Anthony Chickillo was not much more than a warm body out there taking snaps from guys likes Dupree and Watt. Why?

Can the Steelers please put Matthew Thomas on the field defensively? Is Nat Berhe that much better of an option in dime than Thomas? I can’t see it. Get one of your best defensive athletes on the field in the right situations and maybe the tide will turn some defensively for the Steelers.

Terrell Edmunds should burn Sunday night’s tape. He was nothing short of atrocious.

I know he’s a rookie and is going to go through growing pains, but he was dreadful, getting run over by Javorious Allen late in the game, was late to break on deep shots down the seam, and appears very tight in space lacking the athleticism he showed in his testing numbers.

Joe Haden was the Steelers best defensive back on the night, and that’s saying something, considering he allowed John Brown to get behind him on the game’s opening touchdown, and struggled to run with receivers on crossing routes. Haden had a great pass breakup in the end zone on a deep ball to Brown down the middle of the field that kept the Ravens off the board. That was his best play of the night.

Artie Burns and Coty Sensabaugh just aren’t it, folks. Burns is a miss for the Steelers. I’m sorry, but it’s more and more apparent the more he sees snaps. He struggles with awareness when the ball is in the air, and just has too many mental lapses for anyone to trust him on an island.  I’m not even going to get into Sensabaugh.

I thought from first watch Cam Sutton did a fine job in his role, tackling well in space at times. He’s still not the coverage corner fans were hoping for, but I think it’s time to see him in an expanded role. He did couple with Haden for the miscommunication on the game’s first touchdown, but overall I thought he was good.

Sean Davis had six tackles on the night and didn’t seem to have many boneheaded plays, which is a step in the right direction for the much-maligned safety.

One positive out of this game? It appears Chris Boswell is back to his old self.

The Boz drilled both field goal attempts on the night, keeping the Steelers in the game in the first half when the offense couldn’t finish drives.

Jordan Berry was certainly no Sam Koch, but he had a solid game punting the football. The net average won’t stand out, but he showed his powerful leg when he needed to, didn’t outkick his coverage once, and was good with situational punting throughout the game.

Switzer was solid on kick returns, running one back 35 yards to set up the Steelers, but he was negated by Koch as a punt return, often allowing the Ravens to flip the field against the Steelers. Not much Switzer can do there; just thought I’d point it out.