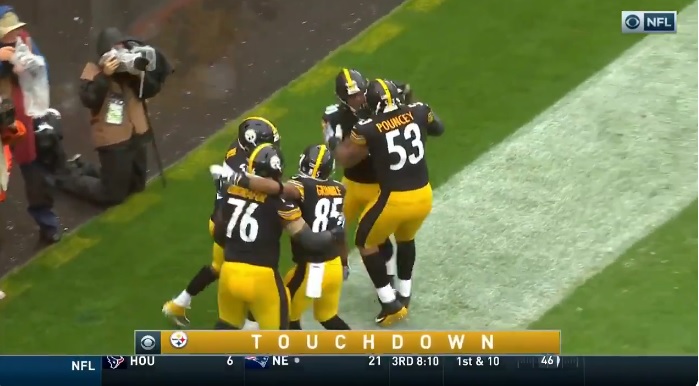 Winners and losers from today’s 21-21 tie against the Cleveland Browns.

James Conner: Little mixed on that one. Everything leading up to the fumble was great. But then, the elephant in the room, there was the fumble that helped bring Cleveland back into the game. But there was a clear missed blocking assignment so you can cut a little bit of a break on Conner (still his fault). A 100+ yard, 2 TD showing though gets him on the list.

Pulling Guards: Tip of the hat to both of them, Ramon Foster and David DeCastro. The Steelers ran power on both of Conner’s touchdowns, which we will break down for the morning. Offensive line as a whole gave Conner plenty of big runways. Unfortunately, things wilted at the end and the tackles got whipped.

T.J. Watt: Flipping sides clearly isn’t an issue for Watt. He dominated the entire game, ending it with three sacks, the only linebacker not named James Harrison to put up a hat trick in the Mike Tomlin era. His run defense was just as stellar, setting a physical edge and showing excellent backside pursuit. This dude is the real deal.

Cam Heyward/Stephon Tuitt: Man it’s going to be a treat to watch these two guys this year. They played like they’re capable of, wrecking a Browns offensive line that has mixed and matched throughout the preseason. Pressure in the backfield and Heyward finished the game with a sack, thanks to initial pressure via Tuitt.

Joe Haden: Bummer he left the game with a hamstring injury. But when in there, his coverage was solid. No time was that more evident than his deflection on an end zone throw to Josh Gordon. Haden timed his jump perfectly to force the incompletion. Run defense may have been a little shakier but still, a good day.

Ryan Switzer: As advertised is the phrase I’d use with him. A 22 yard punt return got the party started. He fielded the ball clean, no easy task on a wet, muddy day, and was always quick to get upfield. No huge runbacks but everything was positive and you can see why the Steelers traded for him.

Mike Hilton: Hilton was his consistent, excellent self in the secondary today. Several breakups and some spectacular, open field tackling. What a diamond in the rough he’s been.

Sean Davis: Nice day for Davis, his debut at free safety. Physical tackler and made several plays in coverage, including an interception that was called back by a Terrell Edmunds penalty. He had a critical 3rd down breakup when the Browns took a shot down the seam for David Njoku.

Ben Roethlisberger: Not all of the interceptions were on him but you just have to be a casual fan to realize that was not the #7 the Steelers needed today. Accuracy shaky, timing with receivers off, and turnovers killed this team, letting the Browns to claw their way back into the game. U-G-L-Y.

Artie Burns: Burns’ play was ok, though not great, but clearly, Browns WR Jarvis Landry was getting in his head. A scuffle between those two resulted in two penalties against Burns that helped give them new life and eventually resulted in a Cleveland touchdown. Burns was benched for one play. It’s the second time in the last two years Burns has been penalized for removing his helmet. Just dumb plays you can’t make. He’s not a rookie anymore.

QB containment: Wrote and spoke a lot about it before the game. Key was keeping Tyord Taylor in the pocket and not give him large escape lanes. For the most part, they failed. Taylor was able to pick up a long first down early in the game and then ran for a touchdown to give them their first points of the game.

James Washington: Washington rarely (or didn’t) play on offense, Ryan Switzer and Justin Hunter gobbling up the snaps behind Antonio Brown and JuJu Smith-Schuster. He was limited to special teams duty and had a mental error, standing in the way of a punt that could’ve bounced off of him. Not a debut to remember.

Jordan Berry: Berry beat out Matt Wile for the starting punter job. But maybe the Steelers are regretting that decision today. Granted, the weather was bad, but Berry shanked several punts that gave the Browns critical, positive field position.