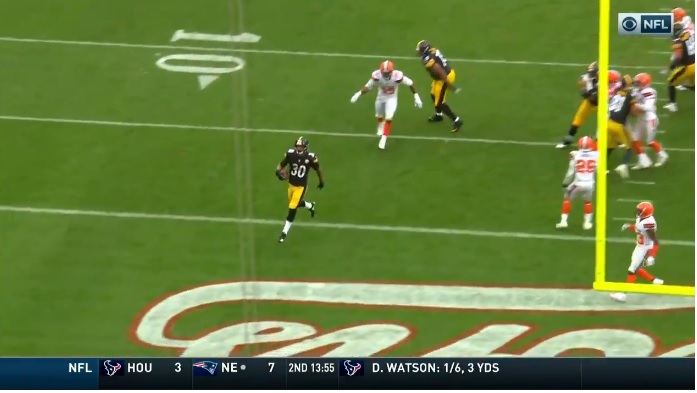 What an ugly, ugly game.

No team is ever going to win a game with 6 turnovers, especially on the road. The Pittsburgh Steelers are lucky they didn’t lose the game in Cleveland, playing to a 21-21 tie in a driving rain off the shores of Lake Erie against the Cleveland Browns.

Let’s try and get through this one quickly so we can move on to Week 2.

Ben Roethlisberger had a rough go of things throughout Sunday’s game, throwing three interceptions and fumbling twice on the road at Cleveland in a steady downpour.

Two of Roethlisberger’s interceptions weren’t his fault, as Antonio Brown broke his route off, rather than running down the seam, allowing Damarious Randall to play centerfield for the easy pick. Roethlisberger’s third pick went right through Jesse James’ hands to Denzel Ward for his second pick of the game.

However, Ben’s first pick was his fault, as the quarterback tried to fit a throw into Brown in the red zone, starring down Brown, allowing Ward to jump the route, taking a chance for points away from the Steelers.

On his first fumble, Roethlisberger should have just eaten the ball after a bad snap from Maurkice Pouncey. He’s a veteran; he knows it’s a run pass option and when the snap goes haywire, just corral it and fall down, take the sack.  He didn’t have great pocket awareness all game long in Cleveland. That was on display again on his second fumble.

When not throwing interceptions, Roethlisberger threw some nice balls in the rain, firing a back-shoulder strike to Brown for a 22-yard touchdown, while also hooking up with JuJu Smith-Schuster on an explosive RPO following Cleveland’s first touchdown.

I’m willing to give Roethlisberger a pass for the most part due to the conditions, but he must be better next week at home.

All Steelers fans will likely remember from James Conner’s first start as a Steeler is the critical fumble in the fourth quarter that set up Cleveland’s second touchdown, but Conner had a great game for the Steelers, racking up his first 100-yard rushing game, and his first two touchdowns of his career.

Conner was decisive and ran hard – consistently falling forward at the end of runs. He really showed he’s a workhorse. Rarely did Conner go down on first contact, but he seemed to run out of gas in the second half.

Aside from his 22-yard touchdown, Brown had a rather quiet day, showing frustration on the sidelines late in the fourth quarter after a short catch-and-run. Brown finished with 9 catches for 93 yards and the score on 16 targets, averaging 10.3 yards a catch. That might not seem quiet on paper, but a lot of AB’s catches came on short crossing routes. That’s not like him.

With the Browns focusing a ton on Brown, JuJu Smith-Schuster a had a big day, hauling in 5 passes for 119 yards on 7 targets, including a 67-yard catch-and-run early in the third quarter.

Justin Hunter had a touchdown wiped out by a holding call on Marcus Gilbert, so his day ended up being quieter than it should have been, with just 1 catch for 6 yards. Ryan Switzer had a really good day as a returner, but didn’t do anything as a receiver, getting just one target on the afternoon.

James’ big drop that resulted in an interception really hurt the Steelers, who were driving down the field for points late in the first half, but aside from the block James was solid.

The Penn State product hauled in 2 passes for 50 yards, including a 37-yard catch-and-run down the right sideline off of a scramble from Roethlisberger. He’s really developed his rapport with Roethlisberger in those situations.

Xavier Grimble didn’t receive a target on the day, but did well on special teams and had a couple of good blocks in the first half.

I’m going to include Chukwuma Okorafor in the tight ends paragraph here because he did some damage as a third tight end in the Steelers’ heavy set, helping spring Conner on his 22-yard touchdown run in the second quarter.

Yes, the Steelers’ offensive line helped Pittsburgh rush for 149 yards (4.5 yards per carry) on 35 attempts and 2 touchdowns, but man alive was the starting unit awful at protecting Roethlisberger on the day.

Pittsburgh’s offense racked up quite a few holding calls, while Alejandro Villanueva and Marcus Gilbert had pretty bad games, both from a protection standpoint and a penalty standpoint.

Ramon Foster returned from injury and played well in both phases of the game, pulling to open lanes for Conner while providing good protection for Roethlisberger. David DeCastro left the game briefly due to a wrist injury, but the standout right guard returned and had an up and down game, opening up lanes in the run game, but struggling with Cleveland’s blitzing scheme at times.

Pouncey had a couple of bad snaps, with one resulting in a fumble from Roethlisberger. Pouncey also had a holding call wipe out a touchdown run by Conner.

I’d like to see this group do a better job of keeping mobile quarterbacks like Tyrod Taylor in the pocket if their pass rush can’t get home, but throughout the game Sunday afternoon, guys like Stephon Tuitt and Cam Heyward dominated the Browns offensive line.

Javon Hargrave and Daniel McCullers rotated at nose tackle, but Hargrave was the more productive player, finishing with 3 tackles in the tie.

Aside from one drive to open the second half in which the Browns simply manhandled the Steelers front 7, Pittsburgh’s linebackers were rather good on Sunday in a sloppy game.

I was really, really pleased with TJ Watt’s output, recording a team-high 11 tackles to go along with a career-high 4 sacks. Watt was all over the place on Sunday. After not playing at all in preseason, Watt played with his hair on fire, saving the game for the Steelers with a clutch field goal block on Cleveland’s game winning try late in overtime.

On the opposite side of Watt, I thought Bud Dupree had a really good game, finishing with 5 tackles, 2 pass deflections, 2 quarterback hits, 1 sack, and 1 tackle for a loss. Dupree really caused problems for Desmond Harrison at times off the edge, and played well against the run. It was a good first game in a big year for Dupree.

Inside, Vince Williams and Jon Bostic were all over the place, combining for 19 tackles, 3 tackles for loss and 1 sack in the tie. Both did a nice job of creating pressure on blitzes, while the duo really stood tall against the run, blowing up blockers and making plays sideline to sideline.

For all the fans down on Sean Davis coming into the season, Sunday had to be a fun game to watch, considering Davis was all over the field in coverage and against the run. Playing in the single-high role, Davis played fast and loose, coming up for big stops against the run, packing a punch when he did it. In the pass game, Davis had a great breakup in overtime against David Njoku, saving the Steelers, who sold out to stop the run.

Pittsburgh is doing the right thing for him as a player, letting him rely on his athleticism to move around the field and break on plays.

Along with Davis, I thought Joe Haden had a good game until hurting his hamstring. Haden looked good running in stride with Browns receivers. The veteran corner finished with 3 tackles and a pass breakup Sunday afternoon.

Once Haden left the game, Cam Sutton came in and the Browns went right at him, as Taylor hooked up with Rishard Higgins for a big play down the right sideline in the fourth quarter, before then finding Josh Gordon over Sutton in the front right corner of the end zone for the game-tying touchdown.

Sutton stood tall down the stretch though, picking off Taylor late in the fourth quarter, sending the game to overtime.

Morgan Burnett and Terrell Edmunds had quiet games, but Edmunds did have a big third-down pass breakup on Njoku near the Steelers’ sideline. Burnett had just 2 tackles in the tie, but didn’t stand out in the passing game, which can be a good thing.

Artie Burns had another boneheaded penalty called on him for ripping his own helmet off after a flag thrown on him, but overall Burns did a nice job on Jarvis Landry throughout the game.

I was really pleased with Mike Hilton too, who was scrappy with Landry throughout the game and blanketed him in coverage when Landry lined up in the slot.

Chris Boswell stunned Steeler Nation by missing a potential game-winning field goal late in overtime, but I think the weather had more to do with that miss than Boswell himself, as did the Steelers playing conservatively leading up to the attempt from 42 yards in the driving rain.

Jordan Berry’s punting numbers might not stand out at just 39 yards per punt, but Berry downed 3 of his 7 punts inside the Browns 20 yard line.

Ryan Switzer paid off right away, as the recently acquired return specialist averaged 23 yards a kick return on 3 returns, while racking up 56 punt return yards on 5 tries, helping the Steelers flip field position at times.

The coverage units were rather solid Sunday afternoon as well, as Tyler Matakevich really stood out in kick coverage, recording 3 stops.