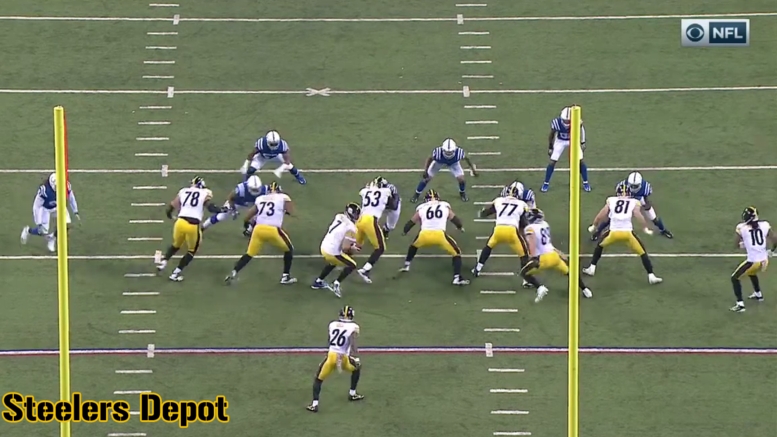 The Pittsburgh Steelers are overwhelmingly a three-receiver offense, and it has been that way for several years now as their primary personnel grouping. Last season, they ran 781 of 1131 plays out of the 11 personnel, or 69 percent of their total offensive snaps, which includes the victory formation.

Coming in second in terms of usage, however, was the 12 personnel grouping, which features only two wide receivers with two tight ends on the field. With Vance McDonald out with an injury for the season opener, this was a look we hardly saw at all on Sunday—literally one of 85 offensive snaps.

But with his return tomorrow, we should expect to see it run with greater frequency, between 10 to 20 percent of the time, depending on what the game circumstances call for. You can also include the 22 personnel grouping here, which features two tight ends and a fullback in addition to one wide receiver and one running back.

The latter is a look the Steelers used Sunday, but when they did run it, it was primarily with tackle-eligible Chukwuma Okorafor on the field as one of the two tight ends. This was a package that they have taken to using over the past couple of seasons, but with McDonald and Xavier Grimble, they may use the two tight ends more from this look.

The one time that the 12 personnel grouping was used on Sunday was in the middle of the first quarter on first and 10, and James Conner only picked up one yard with Jesse James playing off left tackle, the run coming behind left guard. Grimble was the other tight end on the field for the play, aligned behind the right guard and tackle, almost at a fullback position (but not quite).

When the team did run the ball with two tight ends on the field last year from the 12 grouping, they did so effectively, averaging (rounding up) 4.4 yards per carry on 68 rushing attempts. That even includes an ugly outlier with Martavis Bryant losing nine yards on an end-around. Take that out and they averaged 4.55 yards per carry on 67 running back rushes.

If they use McDonald and James in the grouping, they also preserve a strong passing option. James has settled into a reliable possession target who has demonstrated at least occasional chemistry with Ben Roethlisberger, as was on display on their 37-yard hookup on Sunday. McDonald is skilled both as a run blocker and as an explosive-play threat in the passing game.

In other words, expect to see the two-tight end sets out of the 12 personnel grouping a lot more tomorrow than you did on Sunday. Unless Randy Fichtner for some reason has a different stance on this look, but I can’t imagine that being the case.