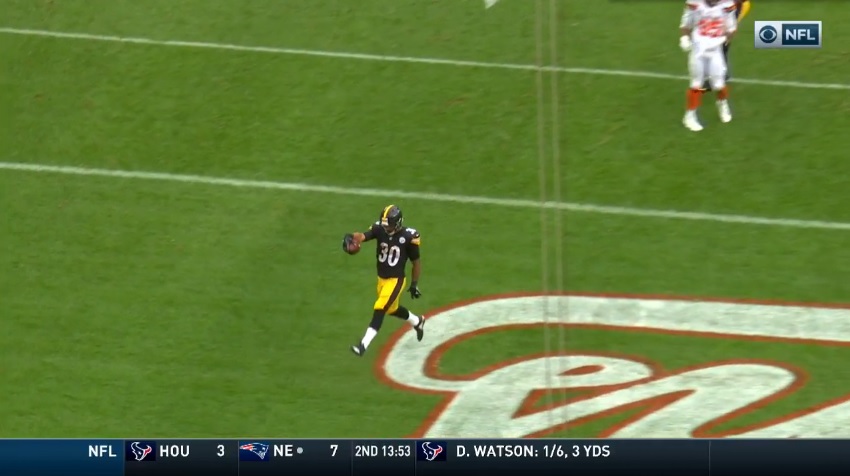 James Conner isn’t Le’Veon Bell but he sure did his best impression of him Sunday against the Browns. Not just in production, racking up 192 total yards, working as runner and receiver, but in snap count. Conner was the only Steelers running back to see the field on offense and wound up playing 92% of the time, a very Bell-like number.

He ended the game with 31 carries, tied for the third most he’s ever had in a game, college or pro. But Mike Tomlin isn’t worried about the workload. If anything, he’s ready to make Conner the bellcow again.

“Man I watched that guy tote that ball a lot next door,” Tomlin said with a smile when asked if he needs to monitor Conner’s carries. “I think he’s been doing that for a long time. I think he’s used to that. I think he gets better with use. I think that’s one of the things that’s attractive about him. I know, what was that, his sophomore year, when he scored all those touchdowns. He likes carrying the football. He warmed up to it.”

In Pittsburgh Steelers history, there’s only been three instances of a back running for more yards in a Week One opener than Conner’s 135 against the Browns: Willie Parker in 2005 and 2008 and DeAngelo Williams in 2016. And his 192 yards from scrimmage was third most in an opener, trailing only Parker in that ’05 game and Bell back i 2014.

Conner didn’t dazzle or wow with his running style. If Bell is Slash, the flashy runner everyone remembers and aspires to be, Conner is Neil Peart; keeping the beat with a steady dose of positive runs. Only two of his 31 carries lost yardage.

The only time he landed off key was a costly 4th quarter fumble, setting up a Browns’ score that got them back in the game. Asked about that play, Tomlin deflected and praised the body of work Conner showed.

With Bell still MIA and no reason to believe he’ll report this week, Conner will remain the workhorse of the Steelers’ offense. If there’s more days like Sunday, the offense won’t skip a beat.