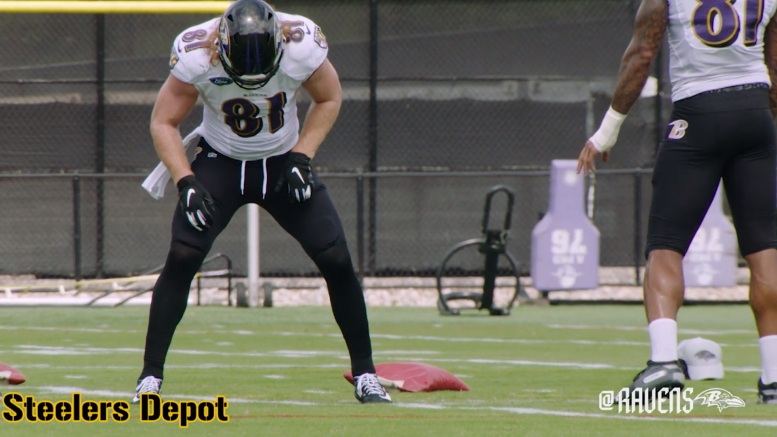 As I wrote about yesterday, Baltimore Ravens first-round draft pick Hayden Hurst finally returned to practice on Wednesday after missing over a month with a foot fracture that required surgery in late August. He was limited again today but believes that he is ready to play on Sunday and is hungry to face the Pittsburgh Steelers.

“I think I’m good to go”, he said of how he feels, though he admitted that “it’s up to the trainers and what they think is right for me”. Should he dress, one of the other three tight ends—veterans Maxx Williams and Nick Boyle and rookie Mark Andrews—may not.

While he knows he is just getting back into the swing of things, the fact that the Steelers are next on deck, and in a primetime game, is really pushing him to participate on Sunday. “My family is from Pittsburgh, so I grew up in that rivalry”, he said.

“It’s a physical game, always is. Both teams don’t really like each other”, Hurst stated as an observer of a rivalry he is about to be thrown right in the middle of. “I would love to be a part of it, would love to get my head in there and throw my body around a little bit. I think it would be fun”.

The Ravens covet the use of two-tight end sets, frankly in the way that I wish that the Steelers would, but Baltimore certainly has the talent to do it, with a strong four to choose from. Throwing Hurst into the mix will only further bolster the group.

Joe Flacco has long been a fan of making heavy use of his tight ends, from Todd Heap to Dennis Pitta to whoever is around him now. Both he and the team are hoping that Hurst is going to be that next regular feature of the offense, somebody who can see 80 to 100 targets per season or more.

The rookie also likes what he sees from how offensive coordinator Marty Mornhinweg utilizes the position, saying that he “really focuses on two-tight end sets” and that “Joe really loves tight ends”. He said of himself and fellow rookie Andrews that if they “can both get on the field at the same time, I think it could be dangerous”.

Of course the Ravens would not have drafted them in the first and third rounds had they not believed that to be the case. Both are talented and athletic players who performed at the college level, and also seem to be a good fit for the team’s offense.

So will the Steelers get their first look at Hurst in a couple of days? And if he does play, how effective will he be able to be? The team recently dealt with a foot injury to a tight end themselves and had to slowly bring him back into the fold.