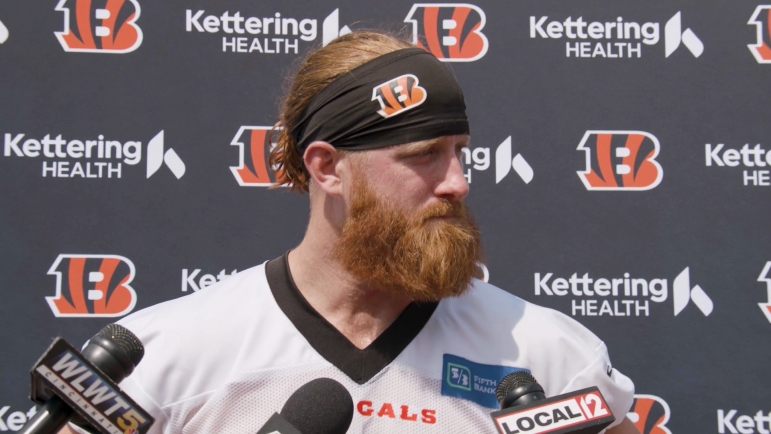 Hayden Hurst was a first-round draft pick of the Baltimore Ravens in 2018. Although the tight end never lived up to his draft pedigree, the biggest issue that he had was the fact that the team also drafted an All-Pro at his position, Mark Andrews, that same year.

The Ravens ended up trading Hurst to the Atlanta Falcons, and now he is back in the AFC North, signing with the Cincinnati Bengals as an unrestricted free agent. He pairs with Drew Sample as their top two players at the position, but he is looking for an even bigger role after having some success with Matt Ryan in Atlanta. And he believes Joe Burrow and the Bengals are the team to allow him to do it.

“With the way Joe Burrow reads coverages, when he sees it, he’s throwing it to where he thinks a guy is going to be open”, he told reporters, via Charlie Goldsmith of the Cincinnati Enquirer. “Now, I’m understanding everything about this offense. What coverage dictates what route. I’ve got to be on top of my game every day, and that’s what makes it so much fun to be a part of this offense”.

Hurst had a career year in 2020, catching 56 passes with the Falcons for 571 yards and six touchdowns. But he was put on the back seat last season with the rapid emergence of rookie first-round tight end Kyle Pitts, who had a 1,000-yard season in 2021.

Now he has the opportunity to be Burrow’s number one target at the tight end position in the passing game, though he has plenty of talented wide receivers to throw to, with Ja’Marr Chase, Tee Higgins, and Tyler Boyd quite arguably making the best trio in the league. Joe Mixon also presents as a passing-game-capable presence out of the backfield with 171 career receptions.

Hurst told reporters that Bengals head coach Zac Taylor saw potential in him beyond what the Ravens and Falcons exposed, and laid out a plan for how he would be used in Cincinnati’s offense. He said that they are now having fun putting that plan into practice.

“It’s fun for Zac being able to move me all around the field. We get to use different formations and show different looks. I’m out wide one play, in the slot in another”, he said. “That makes it easier for Ja’Marr, Tee and Tyler. There’s a lot of versatility in what I bring. They’ve gotten more comfortable putting me in space and letting me make plays with my size and my speed”.

As you know, the Pittsburgh Steelers will be the first team to get to see how the Bengals will use him as they visit Cincinnati for the defending AFC champions’ home opener in Week 1 a week from today. Of course, they should be more concerned with Chase and company than Hurst. But it’s just another thing for them to worry about.