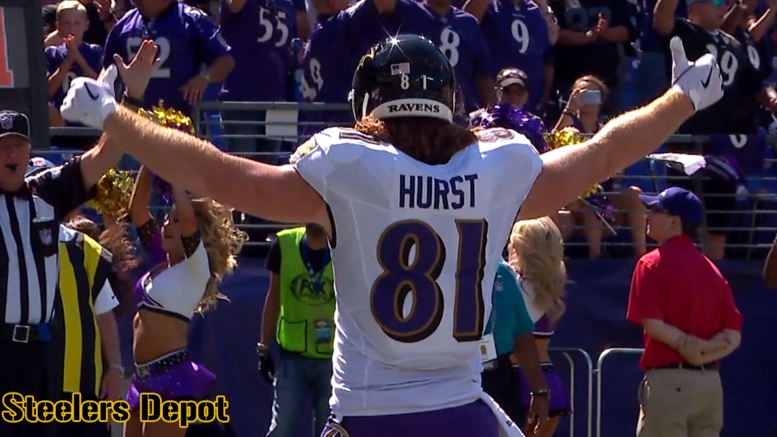 As we continue to slowly but surely catch up on all the goings-on around the AFC North, there is a trade that we need to talk about. We’ve already discussed the one that the Baltimore Ravens made that landed them Calais Campbell, and a hypothetical future trade that may see them deal Matthew Judon. But they did already deal away one notable player.

That would be Hayden Hurst, the tight end they drafted in the first round in 2018. After just two seasons, the Ravens were already willing to move on—for the right price. Within the context of the Ravens’ offense, this is not surprising, of course.

Baltimore doubled up on tight end in 2018 the way they did on wide receivers in 2019. With Hurst being taken in the first round, they came back and got Mark Andrews in the third. Hurst’s early career was plagued by injuries, and that allowed Andrews the opportunity to play. He made the most of it and blossomed into a Pro Bowler.

With Nick Boyle still around as their number two tight end, the Ravens decided that they could part with Hurst for the right price, and they got that price from the Atlanta Falcons after they lost out on Austin Hooper, who was signed by the Cleveland Browns.

In exchange for Hurst, along with a fourth-round pick, the Falcons sent over to the Ravens selections in the second and fifth rounds, so Baltimore now has five draft picks in the first three rounds, including two in the second and third apiece.

Hurst has talked about battling depression in the past. Injuries early in his career that saw him fall behind the curve did not help. Both the Ravens and Falcons believe that he can have a much bigger role in a different offense, such as the one the Falcons run with Matt Ryan under center. Atlanta, by the way, is now projected to have 10 first-round picks starting on their offense in 2020, including Todd Gurley as well as additions from this offseason.

Personally, especially now that he is in the NFC, I wish Hurst well and hope to see his career blossom. He had a lot of talent coming out of college, and I expect that a change of scenery—and an offense that is more geared toward the passing game—will suit him well, especially going to a team that just lost their top tight end.

Hurst played in all 16 games last season, starting four. Over 457 snaps, he caught 30 of 39 passes with zero drops, gaining 349 yards with two touchdowns. For the Falcons in 2019, Hooper caught 75 passes for 787 yards and six touchdowns, despite missing three games.