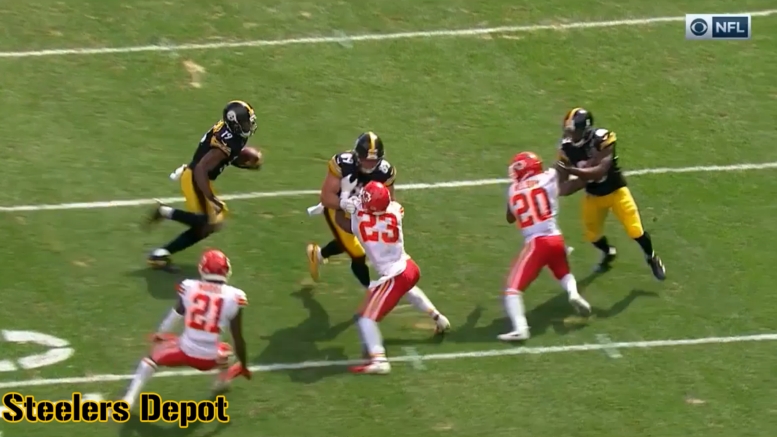 The Pittsburgh Steelers pretty much had to spend the summer up to Sunday without Vance McDonald, the tight end that they envisioned becoming their number one player at the position when they traded for him in late August of last year.

The sixth-year veteran suffered a foot injury ‘of some description’, as Head Coach Mike Tomlin would say, in early August, and his first full practice since then was just over a week ago. He practiced without incident for the remainder of the week and was able to participate in Sunday’s game, with the plan being to ramp up his role going forward.

So how did he look?

The thing about McDonald is that he is a two-way player on offense, meaning that he is going to contribute as a receiver and as a blocker. So while he only caught three passes, he made his contributions in other ways.

For example, when the Steelers faced a first and 20, his blocking down the field was an aid to James Conner in picking up 22 yards. His hassling of the safety about 15 yards beyond the line of scrimmage helped the running back find space at the third level—at least once he got there, breaking three tackles first.

In the second quarter, he contributed with his first reception on first and 10. He first chipped the edge rusher, though Ben Roethlisberger had to awkwardly sidearm the pass to the tight end. Once with the ball, he utilized his three downfield linemen as blockers to pick up 11 yards.

A couple of plays after that, he was a part of the screen blocking for JuJu Smith-Schuster on an 11-yard gain to set up first and goal, driving the cornerback off the ball, though he eventually was the one to force the wide receiver out of bounds.

McDonald made catches on consecutive plays in the fourth quarter, the first for 13 yards. Running a 10-yard seam route before stopping and turning inside, he spaced himself between two defenders, fielded the ball, and turned back upfield to force his way for about an extra five yards.

It was relatively light work for his first game back, seeing well less than half of the offensive snaps, but he still got a substantial workload that shows the plan is for him to be a key component of the group. Expect him to be more impactful Monday night in Tampa.