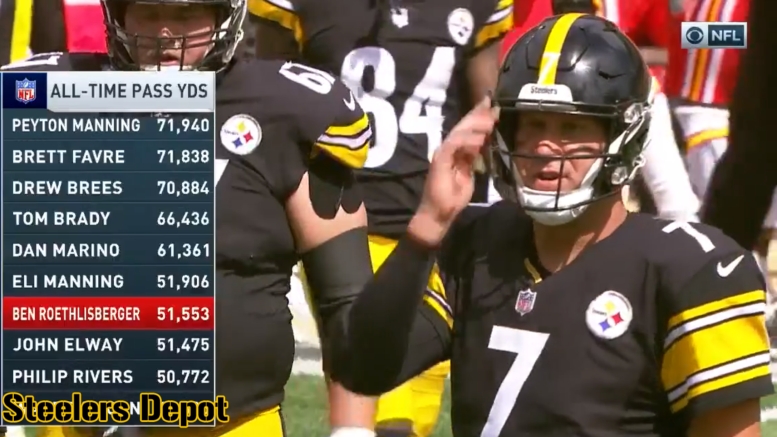 Another article, another housekeeping record to talk about in the wake of a negative result. Pittsburgh Steelers quarterback Ben Roethlisberger moved up another all-time list yesterday, passing Hall of Famer John Elway for the seventh-most passing yardage in NFL history. Elway is the player that Roethlisberger most modeled himself after in his professional career, so I’m sure that has some personal value to him.

The 15th-year quarterback entered yesterday’s game sitting at exactly 51,400 passing yards for his career, needing just 76 yards to pass Elway. He threw for 452 yards on 60 pass attempts with three touchdowns, giving him 51,852 passing yards to finish out the day.

It might be a while before he makes any more moves up the record books, however. While he is just 54 yards behind the number six quarterback as I write this article (note, at about 6:30 PM), that quarterback is Eli Manning, who is still active and who will play about two hours from now.

He will surely add to his lead, and Manning might have to retire before Roethlisberger ultimately overtakes him. It’s worth noting that Philip Rivers is not far behind him, either. He has over 51,000 passing yards himself after throwing for 256 yesterday in a win.

It’s no coincidence that the three quarterbacks from the 2004 class are all (almost) bunched together on the all-time list. Rivers will probably pass Elway himself within the next two to four games, and then Manning, Roethlisberger, and Rivers will all stand between sixth and eighth on the all-time passing list next to each other.

And that will not change for a while. The next active quarterback on the list below them is Matt Ryan of the Atlanta Falcons, and he is about 9000 yards behind them. The next quarterback ahead of them on the list is Dan Marino, who finished his career with 61,361 yards, so it will take at least a couple of years for any of them to crack the top five.

None may after crack the top four. The top three, including the active Drew Brees, have over 70,000 passing yards. Tom Brady is working on about 67,000 passing yards and seemingly wants to play until he is 75.

So top five, number five, may be the benchmark Roethlisberger can realistically set for himself for the remainder of his career, depending upon how long he plays. Perhaps if he decides to play into his 40s, he might have a shot at hitting 70,000 yards (which Brady will surely hit within the next season-plus), but a lot of things will have to go right for that to happen, including him staying healthy.

On the season, he has completed 62 of 101 pass attempts for a completion percentage of just under 62, throwing for 787 yards and four touchdowns to three interceptions. He has been sacked five times and lost both times he fumbled the ball.