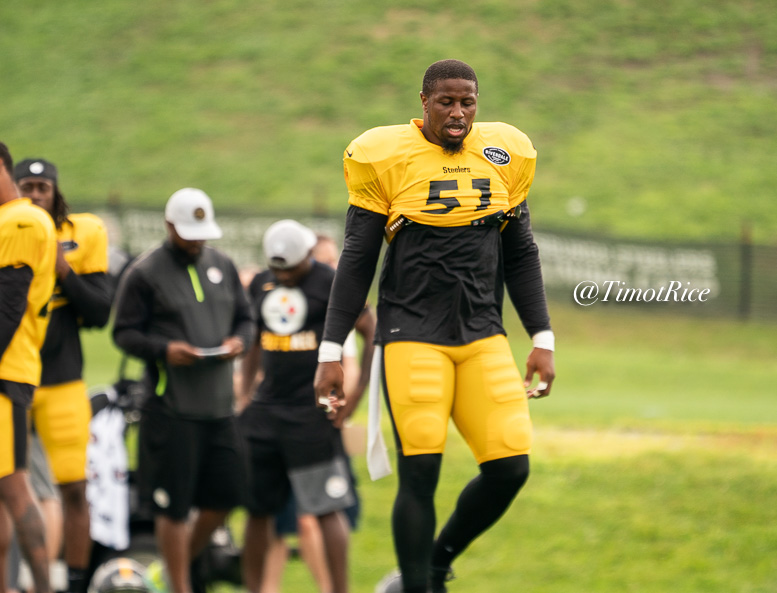 We still have several weeks to go before we’ll officially find out which Pittsburgh Steelers inside linebacker will start alongside Vince Williams. Even so, it now appears as though Jon Bostic, who was signed to a two-year, free agent contract during the offseason, is now getting the bulk of first-team defensive reps over Tyler Matakevich.

“Bostic started every 11-on-11 period next to Vince Williams with the first-team defense for the third consecutive practice,” Mike Prisuta of steelers.com reported after the team’s Friday night practice at Latrobe Memorial Stadium. “Inside linebacker Tyler Matakevich got a little first-team work next to Bostic in place of Williams.”

None of this shuffling should be surprising, however, as the Steelers essentially did the same thing way back in 2002 when James Farrior and John Fiala were battling for the right to play alongside Kendrell Bell. Fiala, much like Matakevich this year, was the established backup player on the Steelers at the time while Farrior, like Bostic this year, was the experienced player added via free agency.

When Bostic was signed back in March, head coach Mike Tomlin and general manager Kevin Colbert both talked quite a bit about how good of a communicator the former second-round draft pick of the Chicago Bears is. During a Thursday interview on SiriusXM NFL Radio, Tomlin once again praised Bostic’s skills when it comes to calling the defense.

“Bostic is a natural defensive signal-caller,” Tomlin told Pat Kirwan of Movin’the Chains. “You just see that in him. He’s a good, clean communicator and particularly for a guy that’s new to us schematically. I can only imagine that that’s going to improve and it’s been really good thus far. We knew that about him, we knew that about him in terms of his professional portfolio.”

Colbert also talked about Bostic Friday night to Kirwan and what led to him being signed as a free agent this offseason.

“We liked Jon, coming out [of Florida],” Colbert said. “He got drafted, unfortunately the health didn’t keep up with him and he finally got himself together last year and started those 14 games for the Colts. And we played the Colts and we were impressed with him and when we needed to add a veteran inside linebacker into the mix, we thought he was a nice fit because I don’t think we’ve seen everything that he can do at the NFL level. Hopefully, he can stay healthy and get into the mix and help us out.”

While Bostic has indeed had some unfortunate luck so far during his NFL career when it comes to injuries, he now views the fact that he’s already played for four different teams a bit of a blessing and that he no longer questions why he’s had so much past bad luck.

“I kind of changed my whole outlook of things,” Bostic told Kirwan. “It really gave me a chance to be exposed to a lot of different schemes and a lot of different coaches. Because last year in Indy, we had a complicated defense. We had to have a complicated defense because we were still missing a couple pieces and so we had to do a lot of different things to try and create pressure, to try and stop different things. But I was smart enough to handle those things and they put even more on my plate where I was able to change the plays, I was able to change the front. They were like, ‘listen, we’re not out there, you’re out there, you’ve played a lot of ball, you’ve been experienced and whatnot.’

“And they had that trust in me to be able to do those things and I feel like playing in the Tampa 2 and then turning around and going to New England, playing in a lot of bear front there and then turning around and going to Detroit, playing on a big quads team there, and then back in Indianapolis is a lot of what I did in college, but even more fronts than what most teams are used to. So, you know, making this transition over here, I mean it was easy, because at the end of the day it’s we called it ‘red’ here, and you call it ‘blue’ here. So it really doesn’t matter.”

If Bostic’s past NFL experience doesn’t ultimately result in him starting over Matakevich come the start of the regular season, you really will then have to wonder what Colbert and the rest of the Steelers scouting really saw in him. Remember, Bostic has already played more than 2200 defensive snaps during his NFL career while Matakevich has yet to even play 100 in total.

While Bostic hasn’t been a member of the Steelers very long, he said in his interview on Thursday that he definitely sees himself as a fit with the team and especially with Tomlin because of how treats his players.

“I haven’t been here too long, but I really see where I fit in here with the organization,” Bostic said. “You know, how coach Tomlin runs things from the top down. You never compare coaches, but he’s a coach that he understands his players. He understands your strengths, he understands your weaknesses, he wants to find out your weaknesses and he wants to get you better in those areas. Hes going to challenge you in those areas and, but also, what you do well, he wants to put you on the field that you do those things well.”

We’ll see in about a month if Bostic is the one that Tomlin puts on the field to start the Steelers 2018 regular season opener against the Cleveland Browns.