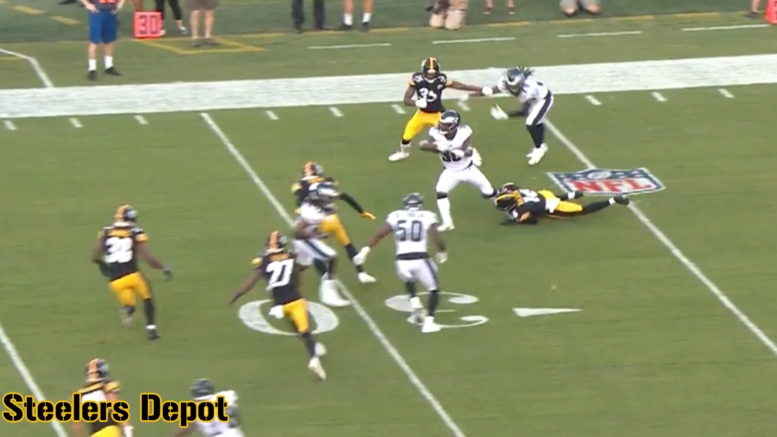 Marcus Tucker is in his third training camp with the Pittsburgh Steelers and figures to be in better position than he has ever been before to actually push for a spot on the 53-man roster after spending at least parts of the past two years on the practice squad.

The first-year wide receiver had a pretty quiet night overall in terms of carrying out his primary task, which is catching footballs. He caught two of them for 14 yards, including a long of nine, which is obviously nothing to get excited about. But he did make a few plays that will help him get noticed and will improve his chances of making the team.

Tucker recorded a tackle on a 59-yard punt from Jordan Berry when the Steelers’ opening possession ended on a three-and-out. After a 13-yard return for a net of 46 yards, the wide receiver grabbed hold of the leg of returner Corey Clement to drag him down.

Pittsburgh’s second possession also ended in a three-and-out, but thanks to an interception, they had much better field position. Berry punted from the 45-yard line, and Tucker was there to down the ball at the one.

Clement did his best to make it more difficult, pretending as though he were lined up under the ball at about the 10-yard line, but Tucker was not fooled and waited on the ricochet of the football once it landed, showing good reflexes and keeping his toes from hitting the goal line, which would have produced a touchback.

Making a couple of plays on special teams will certainly be an asset to any player on the fringes of the roster, but Tucker will also have to contribute on offense, of course. Aside from his two receptions, both of which came during the two-minute offense at the end of the first half, he also found a way to contribute away from the ball.

The Steelers had a first and goal from inside the three-yard line at the end of the two-minute drive late in the second quarter in which he recorded his two receptions. As Fitzgerald Toussaint bowled his way into the end zone for the score, the wide receiver pitched in by throwing a block on the nickelback, putting him on the ground.

These small contributions in the finer details are important qualities for a player such as Tucker to exhibit as he looks to make the 53-man roster. It’s one thing to show that you can make some plays as a wide receiver, but it’s not enough.

Especially not on a team that is already deep at the position with the likes of Antonio Brown, JuJu Smith-Schuster, and rookie James Washington.