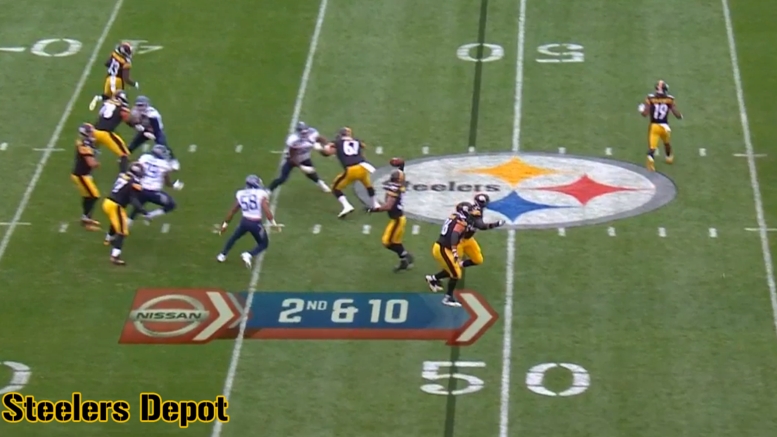 James Conner needed to show last night that he could be a weapon in the passing game for the Pittsburgh Steelers. Probably needed to show that for himself than for anybody else. It’s what he spent so much of his time this offseason working on, and he had not gotten many opportunities to show it during the preseason to date.

Last night, working with top quarterback Ben Roethlisberger, was much different, as the veteran gave Conner frequent opportunities to play receiver and make something happen with the ball in his hands. I’ll have to take a closer look at his offerings in pass protection, but he clearly passed the eye test as a receiver, which is something that I wrote about yesterday morning.

While he found it no easy task to get the ball rolling on the ground against the Tennessee Titans’ starting defense, limited to just 18 rushing yards on 10 carries after finding quite a bit of success rushing during the first two preseason games, he more than made up for it with his contributions through the air.

The second-year running back finished the first half with six receptions, the most that he has ever had in any game at the professional or college level, and he picked up 52 yards. His longest reception came toward the end of the first half with Landry Jones on the field, picking up 12 yards on second and five, but he had three catches of double-digit yards.

On that first reception from Roethlisberger, Conner split out wide to the left on the fourth play of the game, only the tight end among the skill-position players not aligning as a receiver. He cover the middle of the field on a shallow crossing route about a yard past the line of scrimmage, outrunning the first defender before picking up a block from JuJu Smith-Schuster and lowering the shoulder into another for 11 yards.

His second reception might have been even more impressive due to the degree of difficulty of the catch. Roethlisberger misfired a bit high and behind the running back, checking out of the backfield, but Conner looked natural in adjusting and snaring the pass with one hand before quickly turning and working upfield.

Late in the first quarter, he hauled in a pass in the left flat, lining out of the slot to that side of the field. the defender covering the nearby receive slipped in his coverage but regathered himself in time to tackle Conner—or he would have had the big back not slipped through the attempt for an extra four or five yards and a first down.

He already showed in the first two games what he was able to do as a runner. Now he showed that he can be a positive contributor as a receiver as well. At least one running back that is a lock for the opening-day roster looks like he’s ready for the regular season.