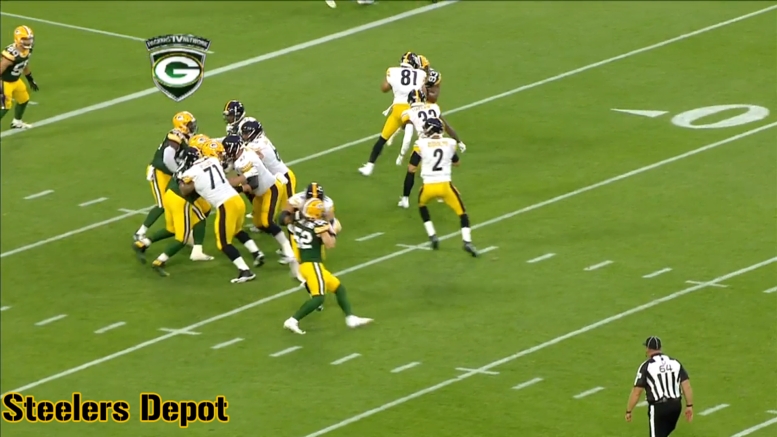 The Pittsburgh Steelers essentially do not have a true number one tight end due to health reasons. Unless Vance McDonald ever learns how to stay on the field, he is always going to be the 1A while he is in Pittsburgh to Jesse James’ 1B.

While James is far from an above average starter, it’s hard to imagine where the team would be without him over the past two seasons. The truth is, he generally gets the job done, even if at times it almost looks like it gets done by accident, and he rarely achieves the bare minimum.

Then again, that’s all you need sometimes. So let’s take a look at his performance against the Green Bay Packers.

We’ll start on the opening drive. On third and long, the Steelers tried to run a draw with James Conner, but the play failed to develop. Matt Feiler got held, which prevented him from reaching the primary tackler, but James also failed to sustain his block.

But then came the next drive, and honestly, I’m going to let the gifs do the talking. On three consecutive carries, Conner and the offense won just about every individual battle en route into the end zone. James got his man turned out of the hole on two of the three plays. This is improvement on his part. That’s a good sign.

Shortly after that drive, the Steelers recovered a fumble on the ensuing kickoff and were quickly back into the scoring business. On the first play of the drive from the 25, Mason Rudolph connected with an admittedly uncovered James on a crossing pattern that he turned upfield for a 21-yard gain. He looked smooth in his catch and transition here.

On the next play, Rudolph found JuJu Smith-Schuster in the back of the end zone for a four-yard score. James was left in to pass protect and mirrored well initially, though began to lose it late, likely knowing that he had help.

All in all, it was what I would probably call an above-average performance from James. He didn’t get the chance to contribute much in the passing game, but as a player away from the ball, this is about as good as he looks, which is serviceable at the least. He rarely looks impressive doing it, but often gets better results than you would assume.