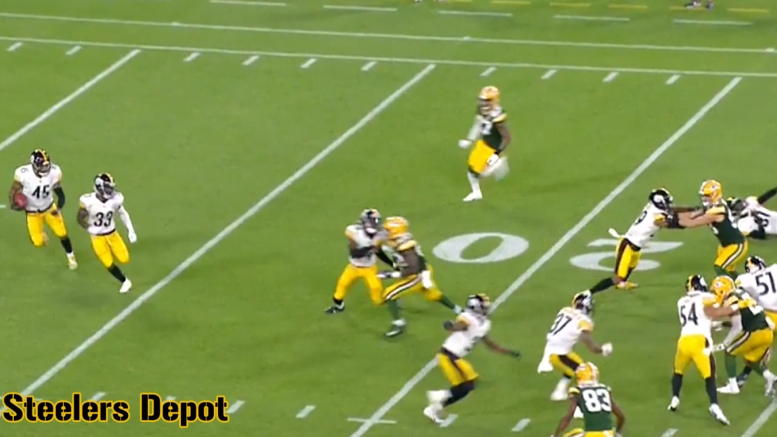 I hope you guys haven’t forgotten that special teams is still a thing, because that is going to continue to help shape the Pittsburgh Steelers’ 53-man roster, as it does for every team in every season.

One player that they seem to be trying to turn into a complete special teams player based on last week’s game is second-year cornerback Brian Allen, a 6’3” specimen with plus size and speed but with still rather raw abilities. He had a rough game on defense, but showed up as a four-phase player on both coverage and return units at some point in the game, which is more than he did last season.

I do not believe he played single snap on the kick return unit last year, but he was there at the start of the game against the Packers, working as a third-level blocker (from the returner). There was nothing particularly noteworthy about this other than to show that he was out there with the first unit, and that they trust in his physicality for the job.

It didn’t take him long to get another shot at a return, of course, with Mason Rudolph throwing a pick six on the first play of the game. His third shot blocking for a return came just a few minutes later. On this occasion, you can more clearly see him directly affect the return, helping to seal a defender out of the lane taken by Fitzgerald Toussaint.

His first rep as a gunner on the punt team was a mixed bag. He did good job of splitting vice jammers off the line and took a good line of pursuit toward the returner, but ultimately missed the tackle.

Later in the quarter, we saw Allen back on the kick coverage team and making another effective block that helped to clear the return lane. While the defender was able to drive across the field, Allen stayed with him and remained engaged to prevent him from making a play.

Finally, he got some looks in what was arguably his most successful role last season, which is jammer. On this snap, he worked as a vice jammer with Marcus Tucker, and the two were able to lock up the gunner, even if the broadcast misses most of it.

I realized in hindsight that I forgot to include an example of his work on kick coverage, but I assure you that he did that too. He also worked on the field goal blocking unit. He clearly is set up to be a game-day active and a regular contributor on special teams. They definitely like his size for it.