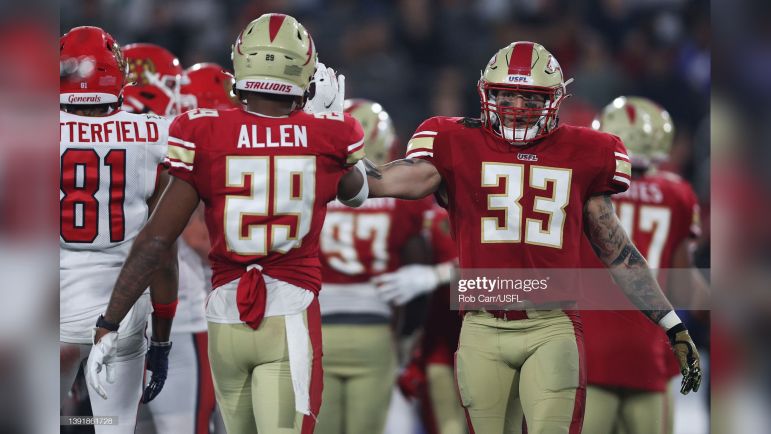 Were you ready for some football? For the first time in over two years, professional football was played in the Spring in the United States, with last night marking the revival of the USFL. The Birmingham Stallions eked out a late victory over the New Jersey Generals for the first regular-season game in this latest incarnation.

And several players who have had connections to the Pittsburgh Steelers in the past were a part of that inaugural game. Perhaps most notably, former cornerback Brian Allen was a starting member of the Stallions’ secondary. He did draw a defensive pass interference call during the game, though he was also able to make a few plays as a starter, finishing the game with four tackles, including one for loss, and a pass defensed.

Allen was a fifth-round pick by the Steelers in 2017. A raw prospect who converted to defense late, his 6’3”, 200-pound frame is what the team saw in him. Though he didn’t develop into an NFL-ready cornerback, he did stick around for two years and contributed on special teams. He has remained a part of the NFL, spending time with the Browns last year; this is his first foray into a ‘minor league’.

Another contributor for the Stallions was running back Tony Brooks-James, who recorded eight carries during the game for 27 yards, and added another three receptions for an additional 18 yards. He spent some time on the Steelers’ 53-man roster as a rookie undrafted free agent in 2019, recording eight rushing attempts for seven yards. He also returned two kicks during his three-game stint before he was waived. Brooks-James was actually brought back to training camp this past year for a few weeks, but did not make the cut. This is also his first appearance in an alternative league.

As for the Generals, they also had their Steelers contributors. Trey Williams spent the 2017 preseason in Pittsburgh, and would go on to see some time in Dallas before playing in the AAF and XFL, even the CFL, before landing in the USFL. He rushed for 54 yards on 13 attempts for New Jersey, adding another 38 yards and five receptions.

Safety Dravon Askew-Henry is an Aliquippa native who was with the Steelers during the offseason in 2019, but did not make the cut. Between stints on practice squads, he did play in the XFL in 2020. He registered two tackles in his Generals debut.

Wide receiver Darrius Shepherd was targeted once during the game, but did not record a reception. He spent all of four days on the Steelers’ practice squad just last year. He was released on January 3, his last football activity before signing with the USFL.

Plenty of more former Steelers, including wide receiver Eli Rogers, will make their USFL debuts today, as all six of the other teams will be playing on Easter. Defensive lineman Johnny Maxey is among his teammates on the Tampa Bay Bandits, coached by Todd Haley, along with linebacker Travis Feeney.

Amazingly, 2011 sixth-round offensive lineman Keith Williams is a member of the Michigan Panthers. He is 34 and has not played anywhere since participating in the Arena Football League in 2017. He is the oldest player in the entire league by two years, and one of only a handful in their 30s.