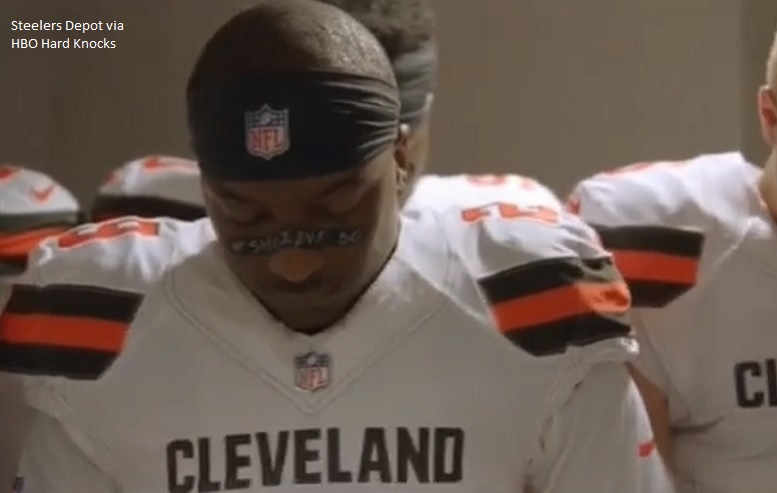 Did you watch the second episode of ‘Hard Knocks’ last night on HBO? If you did and if looked closely at the scene of the Cleveland Browns in their locker room ahead of the team’s preseason game against the New York Giants, you saw running back Duke Johnson once again paying tribute to Pittsburgh Steelers inside linebacker Ryan Shazier.

Johnson is shown during the Tuesday night episode with his head down praying in the Browns locker room with #Shalieve50 written on his black nasal strip, as seen above, an obvious tribute to Shazier, who suffered a serious spinal injury last season that has resulted in him being sidelined indefinitely.

After Shazier suffered his injury last season, Johnson, who is now in his fourth season with the Browns after being originally selected by them in the third-round of the 2015 NFL Draft put of Miami, paid tribute to the Steelers linebacker a few times following him scoring touchdowns and that included him taking a knee in prayer with a few teammates before rising and holding up both hands to signal Shazier’s No. 50.

As things turned out, it eventually came to light that Johnson and Shazier went to and played for neighboring high schools in Florida. The two players, however, had no previous relationship with each other than both are from the South Florida area. Johnson also explained the reason for his tribute to Shazier.

“I do it for him and his family,” Johnson said.

The running back also later said that his acknowledgement of Shazier isn’t designed for him to personally receive any accolades.

“I just do it and kind of move on,” Johnson said. “Once again I’m not actually doing it for praise, for people to reach out. To me it’s bigger than that.”

Steelers head coach Mike Tomlin was asked about Johnson’s tribute to Shazier during a conference call with the Cleveland media prior to the regular season finale.

“It’s just great to be in a business where that gets highlighted,” Tomlin said. “That happens all around us. Guys show class in a lot of ways, but for whatever reason in today’s sports society we spend a lot of time talking about negativity. … I tip my cap to him for what he’s doing.”

Johnson is certainly an easy player to root for and especially when he’s not playing against the Steelers. He figures to have a pretty big role in the Browns offense again this year and we wish him a healthy and prosperous season and appreciate his continued tributes to Shazier.