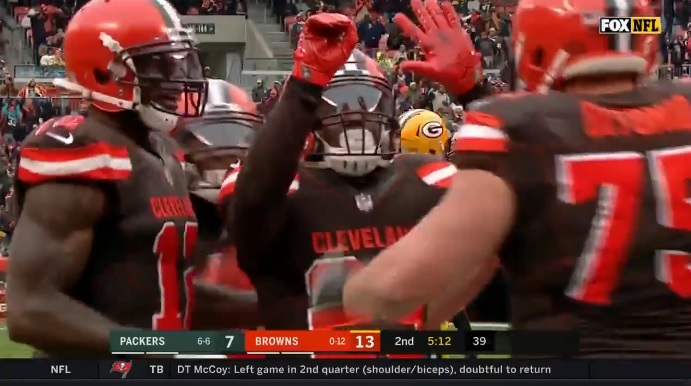 I know Steelers’ Nation, and the rest of the league, poke a lot of fun at the Cleveland Browns. But not today. What Duke Johnson did following his second quarter touchdown is incredibly special. Scoring on a shovel pass, Johnson dropped to his knees, said a prayer, and then held up 5-0 in honor of Ryan Shazier. Take a look.

Duke Johnson Jr. with a classy move after scoring a TD just now in Cleveland. Dropped to a knee, prayed and held up a 5-0 with his hands/fingers to the sky. #SHALIEVE #prayfor50 @DukeJohnson_8 @RyanShazier @steelers @Browns pic.twitter.com/VKKjcO3Xg9

I’m not sure if there is a connection between the two players beyond the football brotherhood but wow, this is a classy and touching gesture.

Digging a little deeper, the two grew up near each other, playing high school in South Florida about 20 minutes apart. College took them to different parts of the USA, Johnson stayed in Florida to play at the U while Shazier attended Ohio State but were brought back together twice a year when the Steelers faced the Browns.

Johnson has a reputation as a good dude and hard worker, stuck on bad Browns’ teams who never utilized him the way that they should. I watched this “Mic’d Up” video on him a few weeks ago and I think it reveals some of his high character.

All the props to Duke Johnson. He took his moment of glory, finding the end zone, to share it with and for someone else. That’s as selfless as it gets.