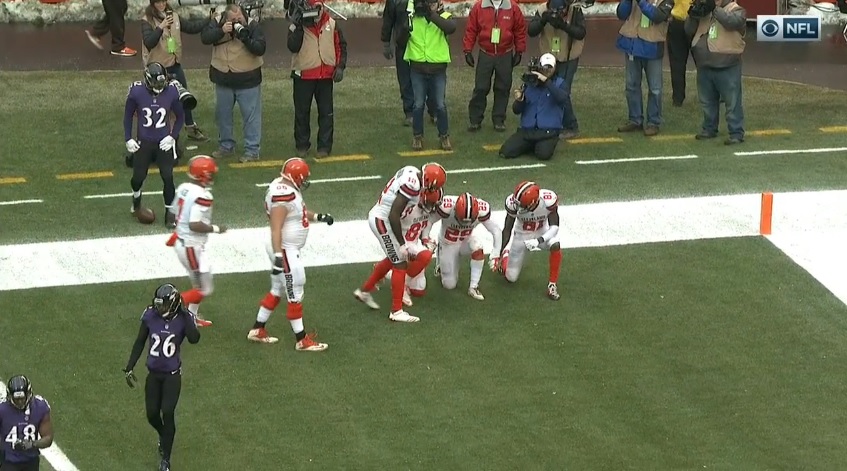 Duke Johnson has done one of the NFL’s classiest gestures of the year, repeatedly kneeling and praying in the end zone for Ryan Shazier. He’s even gotten his Browns teammates to join him. But up until now, I don’t think I read any quotes from Johnson on his reason or inspiration. Today, ESPN’s Pat McManamon wrote a really good article today with some info from Johnson.

As it turns out, there is no real hidden meaning for why Johnson is offering up the Shazier tribute. They went to high school about 20 minutes apart but never knew each other and aside from going against one another twice a year, there is no special friendship. For Johnson, it’s simply doing what he feels is the right thing.

“I just do it and kind of move on,” Johnson said vai McManamon. “Once again I’m not actually doing it for praise, for people to reach out. To me it’s bigger than that.”

Shazier appears to be back home, or at least, was able to spend Christmas at home, judging by some photos the family posted, where their spirits seemed high.

Thanking God for one of the best Christmas ever! The true meaning of Christ loving and appreciating family and honoring God!! We just love and we’re so thankful for this young man !! God has blessed us with two amazing sons!!??❤️?

For Johnson, as he said in the article, it was just “looking out for one of our own.” He said he’ll continue to pray for him Sunday, should he find the end zone, when the Browns come to Pittsburgh for the finale. There’s a decent chance that happens; Johnson is the team’s leading receiver and has found the end zone two of the last three games.

Mike Tomlin chimed in about what Johnson has been doing in a conference call with Browns’ media.

“Guys show class in a lot of ways, but for whatever reason in today’s sports society we spend a lot of time talking about negativity…I tip my cap to him for what he’s doing.”

Certainly, Steelers’ Nation should be doing the same.