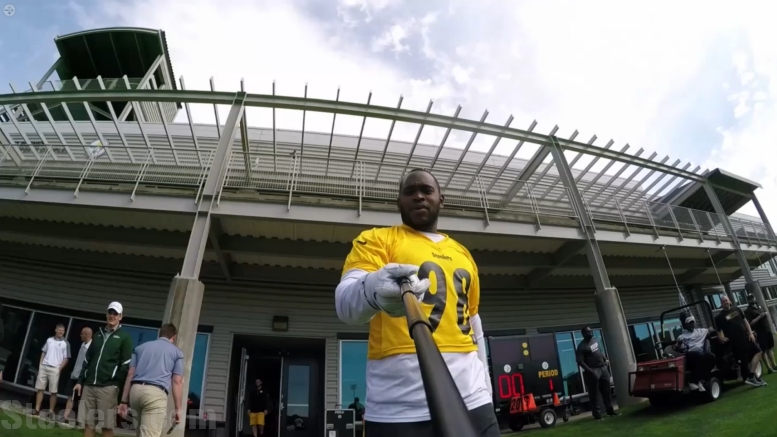 Vince Williams is one of the easiest people to root for on the Pittsburgh Steelers. Not only does he have a fun personality, his love of the game is transparent. And so is his love for his team. The sixth-year veteran is entering the final year of his contract not sure right now what the future holds, but he knows what he hopes for.

“I want to die a Pittsburgh Steeler”, the inside linebacker told reporters earlier today. He was asked about his contract status and whether or not he was aware of any ongoing discussions between the front office and his representatives. That’s, uh, pretty emphatic.

Vince Williams is entering the final year of his contract. He didn’t make it sound like any negotiations on an extension are currently ongoing.

“I want to DIE a Pittsburgh Steeler.”

Chris Adamski noted that Williams did not seem to be aware of any current contract talks underway, but that doesn’t mean it won’t happen. There is still more than a month before the regular season begins, which is plenty of time to get multiple extensions done with veteran players—provided that the Steelers can find the cap space.

General Manager Kevin Colbert admitted recently that doing such deals might be complicated by the fact that they were unable to reach a long-term agreement with running back Le’Veon Bell. The team was hoping that a new contract would lower the All-Pro’s 2018 cap hit, but now they know they will have to accommodate his full $14.55 million salary.

Williams, kicker Chris Boswell, and tight end Jesse James are some of the most obvious names of veteran players who could potentially be up for a contract extension as they head into the final season of their current deals. Boswell, a Pro Bowler, might be of the highest priority, currently scheduled to play the season on a second-round restricted free agent tender.

Of course failing to work out an extension over the course of the next month does not preclude Williams from continuing his career with the Steelers in 2019 and beyond. There are plenty of examples of players the Steelers have re-signed during or just before free agency was set to begin. They did so with Ramon Foster twice, for example.

The 2017 season was Williams’ first as a full-time starter. Unsurprisingly, he posted career-highs across the board with 89 tackles, an interception (his first), and eight sacks as an inside linebacker. He logged close to 750 snaps during the regular season, averaging about 45 snaps per game, a sign of his coming off the field for the dime defense.

Regardless of the extent of his starting experience, he is and has been one of the defensive leaders and ‘energy-bringers’ on and off the field, a valuable asset that is not fully quantified on a stat sheet.

Nor is the drive that comes with a sense of loyalty, which Williams certainly seems to have for the Steelers, who gave him a shot as a sixth-round pick in 2013. He may have been pissed off when they drafted Ryan Shazier a year later, but I’m pretty sure he’s since made his peace with that.