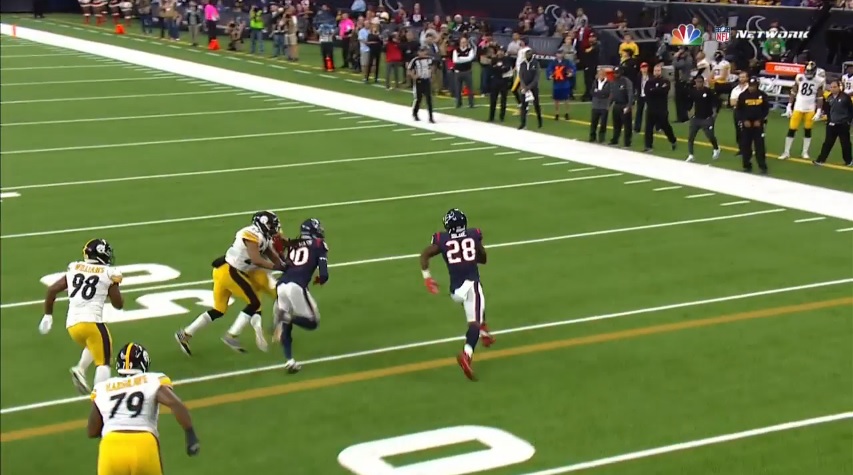 There’s no topic we’ve heard more about this offseason on the defensive side of the ball for the Pittsburgh Steelers than the focus on stopping the run. it was a sporadic issue that became a constant last season after Ryan Shazier was injured, replacing to occasional gash runs with death by 1000 papercuts. It’s largely responsible for the team’s early playoff exit.

So it’s no surprise to see Pro Football Focus rank the Steelers 25th in the league in terms of run defense. Only the Lions, Saints, 49ers, Colts, Cowboys, and Chiefs were ranked lower than Pittsburgh in this department, a fact that probably gives guys like Casey Hampton and Aaron Smith ulcers just to think about.

“Without Ryan Shazier in the lineup, we saw just how susceptible the Steelers’ run defense could be”, their entry in the list read. “They got manhandled by a lackluster Jaguars offensive line in the playoffs with their linebackers struggling to shed blocks all game. They’ve remained nearly status quo since then with linebacker Jon Bostic being the only change”.

That is not entirely accurate, as Morgan Burnett was another significant addition in terms of the run defense. Bostic as an inside linebacker and Burnett as a safety both ranked within the top 10 at their positions according to PFF in terms of tackling efficiency, which is the rate at which they miss tackle attempts.

For those curious, the Steelers’ top three run defenders last season came from all three different levels of the defense. Nickel cornerback Mike Hilton had the best run-defense grade on the team, followed by defensive end Cameron Heyward, and then outside linebacker T.J. Watt, which is a good sign for the second-year player. In fact, two of those players were in their first season in 2017.

Pittsburgh knows that it has to do a much better of stopping the run next season and making offenses more one-dimensional. That has always been the foundation of their great defenses in the past, and is a formula that still works today. Perhaps if they could just communicate better, a lot of the problems would be resolved.