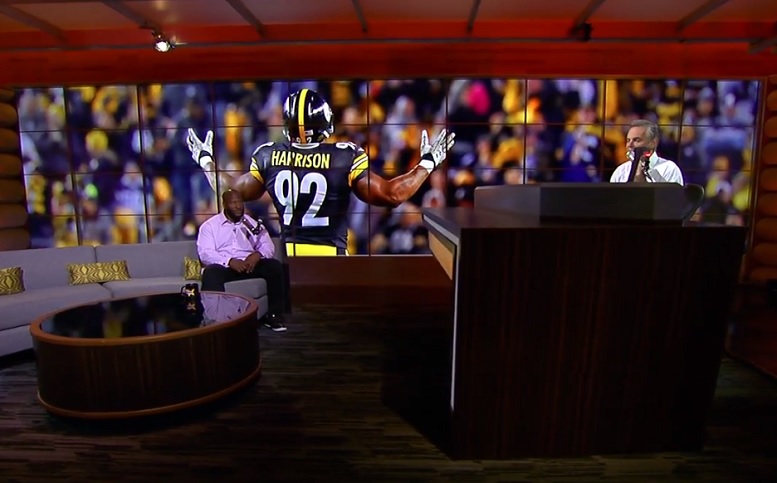 Former Pittsburgh Steelers outside linebacker James Harrison made the rounds around Fox Sports late this week as he was a guest on at least three shows that I know of. While all of you probably already know all about Harrison saying Thursday that New England Patriots head coach Bill Belichick is much better at his job than Steelers head coach Mike Tomlin is at his, the recently retired 40-year-old was also asked during one of his interviews to speak about what’s preventing his former team from getting back and winning the Super Bowl.

Harrison, as you can probably guess, pointed at the Steelers defense as the real reason why the franchise hasn’t made it back to the Super Bowl since the 2010 season.

“To be honest with you, we need to play better defense,” Harrison said Thursday afternoon on Skip and Shannon: UNDISPUTED. “Need to get better on the defensive side of the ball. Like I said, you have the best offense in my opinion, in the NFL over there with the offensive side. So to me, you gotta get better on defense and, you know, just do everything better.”

Harrison wasn’t done talking about the Steelers defense and how Tomlin doesn’t pay attention to some of the finer details like he should, however. In fact, during his Thursday afternoon interview on The Herd with Colin Cowherd, Harrison had an interesting response when asked if it’s indeed true, in his opinion, that Tomlin is a little loose when it comes to managing some details during games.

“I feel like it needs to be more disciplined, some of the things that they do coaching wise, I feel like some of the situations that we were in when we were there as far as time management, calling of defenses,” Harrison said of Tomlin’s coaching. “We had a situation where we had double-called defenses because, you know, one thing was said and then someone said something else. So, you got half the defense playing one defense, the other half playing something else. So, you get situations out there where it looks bad, like, oh, this guy doesn’t know what he’s doing. Well, he’s just playing a different defense possibly on that play than what the other half of the defense was playing.”

We’ve known for a while now that the Steelers defense has dealt with several communication issues over the last few seasons but the indications were that those were mostly related to players not relaying calls or checks either properly or timely enough. Now we know that some of the communication problems the Steelers defense has had the last few seasons have been a result of the unit getting different calls from the sideline. Sure, I would expect an occasional mistake such as two calls going in maybe once or twice a season, but Harrison makes it sound like it happened quite frequently over the course of the last few years. Quite honestly, more than once I have even wondered if half the defense was playing one call while the other half was playing a different one.

Regardless of where the blame ultimately lays, and it could likely be multiple spots, it needs to be fixed as of yesterday and certainly prior to the start of the 2018 regular season. With two new coaches added on the defensive side of the football this past offseason, perhaps that will help some. Additionally, the Steelers made it a point to sign two defensive free agents this offseason who are known for having great communication skills on the field in safety Morgan Burnett and inside linebacker Jon Bostic. Hopefully their additions will pay immediate dividends in several ways with proper calls and checks being made more consistently being just some of those ways.

Harrison also added this final tidbit about what happens in New England with their coaches and why he thinks top to bottom they’re better than the Steelers coaches are.

“The coaching is better, the plans they put together are better and they don’t ask their players to do anything that’s outside of the realm of what they feel their capabilities are,” Harrison said. “So, when you do that and you switch a lot players in and out for certain things that you want to get accomplished, then you get things done and that’s what they have over there [in New England].”