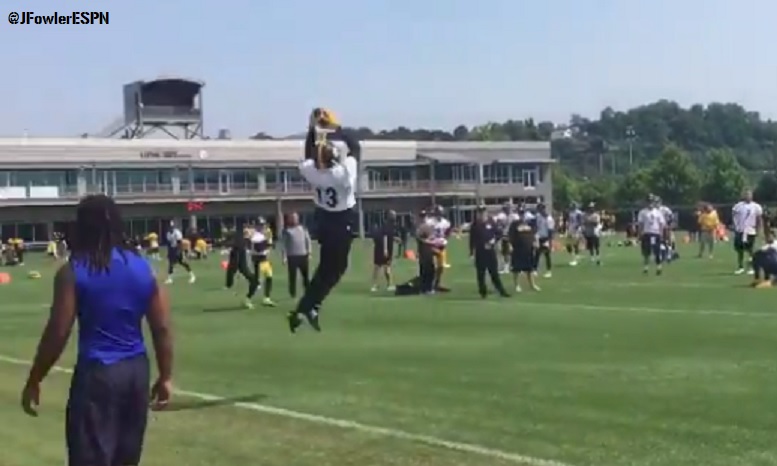 There’s a lot of reasons to be excited about Pittsburgh Steelers rookie wide receiver James Washington, the team’s second-round selection in the 2018 NFL Draft. After all, he was the most accomplished wide receiver in this year’s draft class and even named the winner of the Biletnikoff Award for his play last season at Oklahoma State. During a recent interview while at the National Fantasy Football Convention in Fort Worth, Texas, Steelers second-year quarterback Joshua Dobbs was asked to give his thoughts on Washington and specifically on how he looked during the team’s offseason practices.

“He’s looked really good,” Dobbs said, according to Cover 1. “I remember watching him when he was in college, just from afar. Dynamic playmaker, deep ball, as we all know. But seeing him in OTAs, (his) route running is really good, (he) has strong hands through the catch, he makes that contested catch, and then can take the top off the defense. So, he definitely adds another element to our offense.”

The Steelers will report to Latrobe for the start of their 2018 training camp a week from Wednesday and when Washington arrives, he’s expected to be in excellent physical condition as that’s one area he’s already impressed Steelers head coach Mike Tomlin in since he was drafted.

“James is doing really well and I think the first thing that comes with him doing really well is he’s in really good shape for a rookie,” Tomlin said of Washington in mid June. “His level of conditioning can be compared to that of a veteran and that really allows them to really help themselves, because he’s able to absorb the number of reps that’s going to allow him to improve, to learn what to do, to show that he knows what he’s doing. He’s absorbing a lot of reps during our work right now and he’s getting those reps because he’s in good shape. If he wasn’t in as good a condition, he wouldn’t have been able to get those things. There’s consequences of not being in condition.”

“James has a great deal of ability, he’s very very talented,” Drake said of Washington. “[Kevin] Colbert and Mike [Tomlin] knew going in what kind of talent that he had and he hasn’t disappointed us. He’s shown signs of how good he can possibly be. He still has a lot of growing to do, he’s in the infant stages right now and as he continues to grow, we’re just trying to get him that little bit better and get him out of that infant stage so that when we get to training camp, he’s in preschool. So, by the time the season starts, we want to have him moving on up to where he’s at graduation from high school and on to the college level and becomes a pro going on through the season.”

The Steelers are hoping that Washington can make an immediate impact during his rookie season as a replacement for former wide receiver Martavis Bryant, who was traded to the Oakland Raiders during the first night of this year’s draft. Like Bryant did during his short career in Pittsburgh, Washington will be expected to stretch the field and provide quarterback Ben Roethlisberger with a deep and reliable pass target, something he did quite frequently during his four years at Oklahoma State.

“A very similar talent to JuJu (Smith-Schuster), when he came in last year,” Dobbs said of Washington over the weekend. “Hard-worker, soft spoken, just wants to come in and play football and be good. So, it’s great to be around that and to throw to him and I know that he’ll take a lot of steps forward in camp.”

Washington registered 226 total receptions for 4,472 yards and 39 touchdowns over the course of four seasons at Oklahoma State.