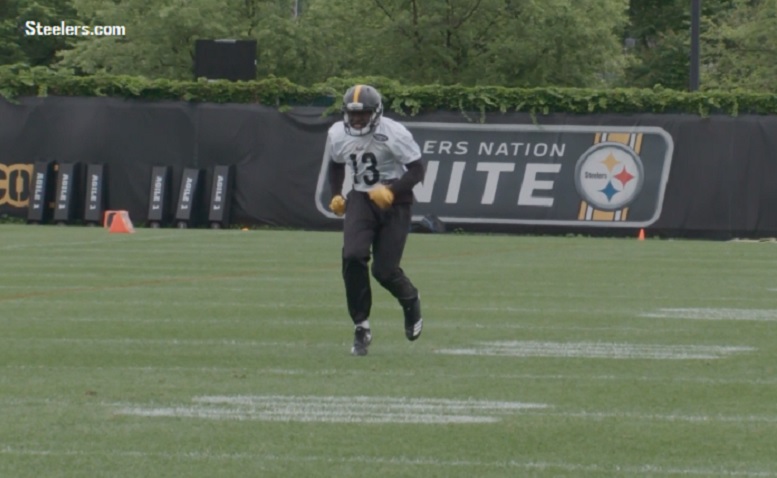 When the Pittsburgh Steelers finish their final mandatory minicamp practice of 2018 on Thursday, head coach Mike Tomlin just might lecture his younger players on just how important it is for them to use the next six weeks wisely when it comes to acquiring the conditioning level necessary to participate at a high level during training camp.

One of the rookies that Tomlin might not have to worry about when it comes to having proper conditioning for training camp is wide receiver James Washington, the team’s second-round draft pick this year out of Oklahoma State.

During a Wednesday question and answer session with Steelers Nation Unite members, Tomlin was asked to comment on the progress Washington has made since being drafted by the team and the head coach proceeded to thoroughly praise the young wide receiver and especially his overall conditioning at this stage of the offseason.

“James is doing really well and I think the first thing that comes with him doing really well is he’s in really good shape for a rookie,” Tomlin said of Washington. “His level of conditioning can be compared to that of a veteran and that really allows them to really help themselves, because he’s able to absorb the number of reps that’s going to allow him to improve, to learn what to do, to show that he knows what he’s doing. He’s absorbing a lot of reps during our work right now and he’s getting those reps because he’s in good shape. If he wasn’t in as good a condition, he wouldn’t have been able to get those things. There’s consequences of not being in condition.”

That’s mighty high praise for Washington from Tomlin this early on in the process and quite honestly, he sounded sincere about the wide receiver being highly conditioned way ahead of training camp getting underway.

Washington’s position coach, Darryl Drake, also had some praise for the young wide receiver as well during his talk with the media on Tuesday.

“James Washington, he has a lot of ability and a lot of talent,” Drake said on Tuesday.

So, will Washington ultimately be ready to start the regular season as the team’s No. 3 wide receiver behind Antonio Brown and JuJu Smith-Schuster? It’s hard to say for sure right now, but Drake certainly made it sound on Tuesday like Washington should be able to contribute and be a large part of the offense during the first quarter of the 2018 regular season.

“James has a great deal of ability, he’s very very talented,” Drake said. [Kevin] Colbert and Mike [Tomlin] knew going in what kind of talent that he had and he hasn’t disappointed us. He’s shown signs of how good he can possibly be. He still has a lot of growing to do, he’s in the infant stages right now and as he continues to grow, we’re just trying to get him that little bit better and get him out of that infant stage so that when we get to training camp, he’s in preschool.

“So, by the time the season starts, we want to have him moving on up to where he’s at graduation from high school and on to the college level and becomes a pro going on through the season.”