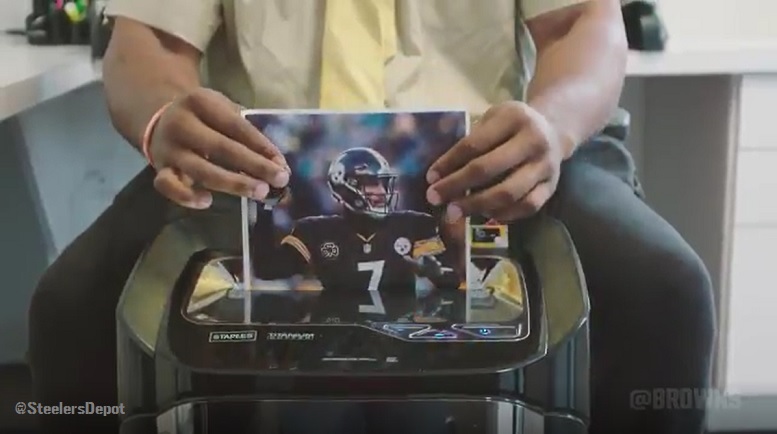 The Pittsburgh Steelers will open their 2018 regular season on the road against the Cleveland Browns in 51 days. Judging by a recent promo video posted by the Browns, their defensive end Myles Garrett is probably counting down the days until he gets another shot at getting after Steelers quarterback Ben Roethlisberger.

In a recent Browns video parody of the intro to the classic NBC sitcom, ‘The Office,’ Garrett, the team’s first-round selection in 2017 and the first-overall pick in last year’s draft, is dressed as the fiendish, yet dorky, character on the show, Dwight Schrute. Late in video he is shown feeding a photograph of Roethlisberger into a paper shredder while obviously looking like it brings him great satisfaction in doing so.

Garrett made it clear immediately after the Browns drafted him that he looked forward to facing the Steelers and Roethlisberger during his rookie season and that he wanted to “chop him down.” Roethlisberger and several members of the Steelers offensive line took notice of Garrett’s comments and they traded jabs in both the traditional and social media platforms.

As things ultimately turned out last season, Garrett never even got a chance to get after Roethlisberger in either of the Browns two regular season meetings against each other in 2017. Garrett missed the first meeting between the two teams to open the 2017 regular season because of an ankle injury and while he did play in the regular season finale against the Steelers, Roethlisberger sat that Week 17 contest out in order to rest up for the playoffs.

Barring injuries, Garrett figures to get his first shot at Roethlisberger in Week 1 this season and he let it be known back in late May at a team golf outing for charity that he is looking forward to possibly finally getting that opportunity.

“Oh thank God,’’ Garrett said in late May when reminded that the Browns will open the 2018 regular season against the Steelers.

So, does Garrett still plan to chop Roethlisberger down?

“Absolutely,’’ he said. “I’m a man of my word, so hopefully I get to meet him on the field and off the field.”

Garrett registered 7 sacks in the 11 games he played in during his rookie season with one of them coming in the regular season finale against the Steelers. That late second quarter sack of Steelers backup quarterback Landry Jones also produced a fumble and the Browns defense recovered it.