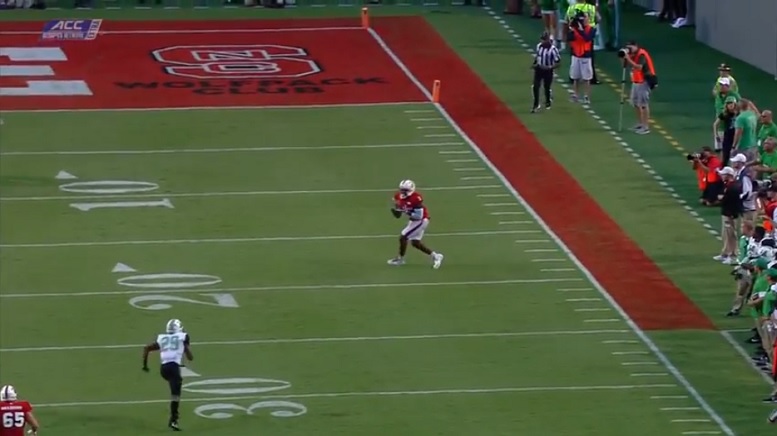 It’s been a few months now since the Pittsburgh Steelers selected running back Jaylen Samuels in the fifth-round of the 2018 NFL Draft and yet I still see him mischaracterized by several writers and bloggers. This is happening because they refuse to watch Samuels’ tape in lieu of just regurgitating bad information they’ve read elsewhere.

In an effort to help you see just what kind of receiving option Samuel’s really is as he enters the NFL, I have contextualized for you all 76 of his receptions that he had last season at North Carolina State. If you read the table below and watch several of the linked plays, you will clearly see that Samuels is not yet a premier receiving option like he’s being billed by many as he enters the NFL. In reality, Samuels is just another average pass catching running back who lined up all over the place in the North Carolina State offense. He’s not a true tight end, fullback or h-back as he was very rarely asked to block from those positions during his entire college career. Don’t confuse lining up at those positions with actually being able to play them.

Of Samuels’ 76 total receptions last season, 45 were caught behind the original line of scrimmage. Additionally, only 16 of his receptions came more than 5 yards past the line of scrimmage and 13 of those consisted of him lining up in the slot. Because of these two sets of stats, you should know that Samuels is not a very polished route runner. His routes north of the line of scrimmage general included him running short hitches, comebacks and vertical seams. An occasional flare out and speed out were also run last season.

Samuels was used a ton in 2017 as part of designed screen plays either as a slot wide receiver, an h-back, a lone running back, or lined up outside wide.

15 of Samuels’ receptions were him getting a short pitch from the quarterback as part of either a shovel pass or end-around. Samuels’ average target distance on his 76 receptions was a very dismal 1.11 yards. However, it’s worth noting that 513 of his 597 total receiving yards came after the catch.