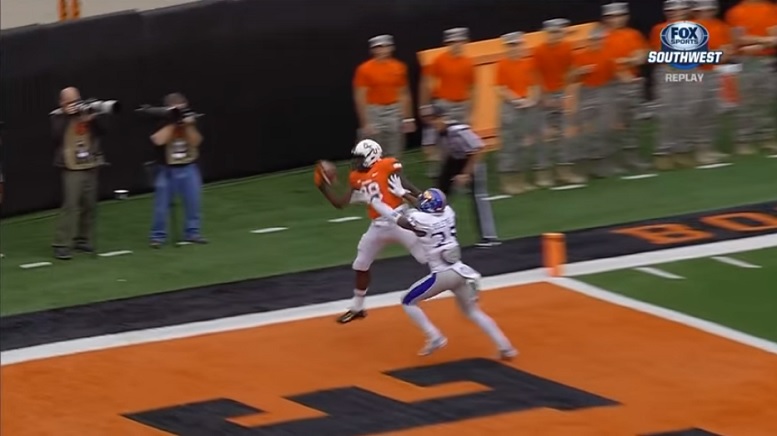 I received a few emails recently asking me if I knew what kind of red zone threat new Pittsburgh Steelers wide receiver James Washington will be in the NFL. That’s really a great question and in an effort to answer it, I figured I should contextualize every red zone target Washington had during his four years at Oklahoma State.

In his four years at Oklahoma State, my research shows that Washington was targeted inside the red zone a total of 41 times. Those targets resulted in 18 receptions for 149 yards and 11 touchdowns. However, it’s worth noting that two of Washington’s red zone touchdown receptions came via end-around plays that included him catching the football behind the original line of scrimmage via a short flip forward from the quarterback. Those two “touchdown receptions” accounted for 10 of his 149 receiving yards.

Washington was targeted quite often inside the red zone via fade routes to the right side of the field. That route, however, only resulted in three touchdown receptions on 14 targets. It’s worth noting, however, that a few of those incompleted fade routes to the end zone were the result of a nice play by a defender. Additionally, Washington actually caught four other of those attempts but did so just out of bounds. A few other incompletions on the end zone fade route attempts were poor throws and thus uncatchable. Another one was intercepted.

The other primary red zone targets Washington had during his Oklahoma State career came via quick slants or deep post routes. He also scored a red zone touchdown in 2017 off of a screen play.

On the whole, Washington was a productive red zone target during his career at Oklahoma State but it’s worth noting that you never really saw him leap very high in all of these targets. In case you forgot, Washington’s vertical jump at this year’s scouting combine was just 34.5-inches.

While Washington is likely to register some red zone touchdowns during his NFL career, I firmly believe that most of his scoring will come via deeper routes. I don’t think you’ll see him targeted on end zone fades quite often as a member of the Steelers