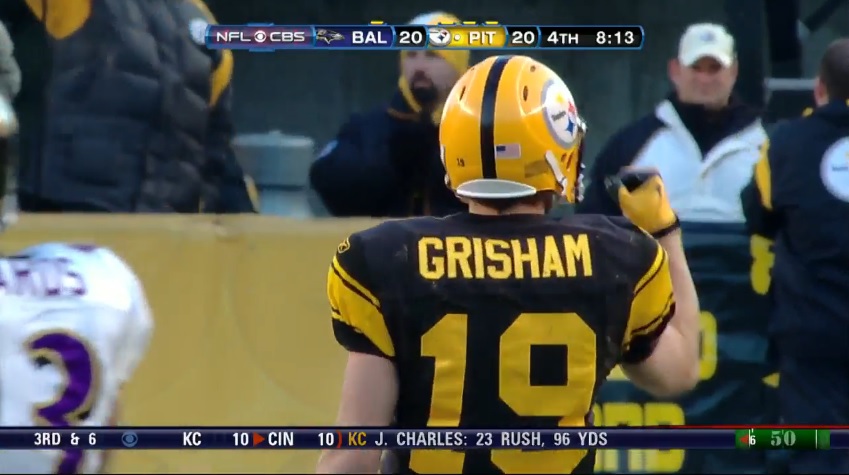 From the get-go, Tyler Grisham was unfairly compared. He was short. He was white. So everyone expected him to be Wes Welker. I distinctly remember hearing that comparison during a preseason game and even then, all those years ago, rolling my eyes.

Grisham ended up being a good training camp story, football’s equivalent of a AAAA player. Able to hang around on the practice squad, make some plays in the preseason, but not much beyond that.

He did get one shot in the NFL though. After making the practice squad his rookie year, 2009, he got his 53-man call up that December after Hines Ward went down with a hamstring injury. He suited up against the hated Baltimore Ravens and for one play, was the star of the show.

It’s the middle of the 4th quarter, the game tied, like virtually every matchup in the Steelers/Ravens series winds up being. Pittsburgh is at midfield facing a crucial 3rd and 3. With that “not living in our fears” mentality, the Steelers call a pass and Ben Roethlisberger took a five step drop.

His first read was Heath Miller but he couldn’t get open enough against man coverage. Roethlisberger pump faked and comes back to his right, finding Grisham streaking away in the middle of the field.

Grisham hauled the pass in, complete for 14 yards. The only one of his career.

Really, he should have had two catches that day, rendering him ineligible for this list, but he dropped a 3rd and 11 pass later that drive. Still, the drive – aided by Grisham keeping the sticks moving earlier – ended in a field goal, the deciding points in a 23-20 win.

He remained on the Steelers 53 man roster the rest of the season and on the taxi squad for 2010. After getting cut for good by the team in 2011, the Denver Broncos added him to their practice squad though he never appeared in another game.

But for an instant, he was Wes Welker.