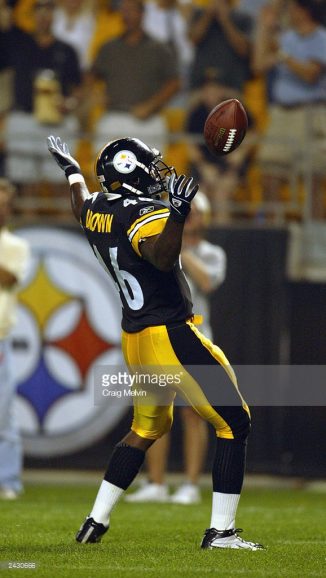 Welcome to a new series we’ll sprinkle in throughout the offseason. Writing about Dallas Baker’s lone career catch yesterday got me to thinking about others in that “solo” club. Players who did one thing only one time in their entire career. One rush, one pass, one interception, one touchdown, you get the idea. Truly, a blip on the radar but Steelers nonetheless and literally, a “one” hit wonder.

I wanted to start with RB Dante Brown, probably the most obscure player we’re going to have on this list (there will be bigger names, like Aaron Smith’s lone career INT). If you’re like me, you had no idea who he was. His name might as well have been Runningback McRunningback Face. And you’d think it was a name from the doom and gloom 80s.

Nope. He played in 2004, one of the best regular seasons in franchise history. But it was, as the series mandates, for one series. And I think only one play.

That lone carry came in the closing minutes of a Week 10 win over the Cleveland Browns, knocking them off 24-10. Pittsburgh needed only one first down to officially end the game, a 3rd and 1 right before the two minute warning. Jerome Bettis’ day was done, a successful 100 yard showing and the still-unknown Willie Parker was even removed from the game after 8 carries for 44 yards.

Duce Staley pulled a hammy and Verron Haynes missed this one too, elevating Brown last-second from the practice squad to the active roster. Brown was a 2003 UDFA out of Memphis, who led the Steelers rushing that preseason, and equally impressed in 2004.

In the preseason opener versus Detroit, he rushed for a 22 yard touchdown, ending the exhibition games with three of them. In the game he didn’t find paydirt, the finale, he averaged nearly 5 yards per carry. Too many names on the 53 for Brown to have a spot, especially as Parker impressed just the same, but enough to keep him around.

So let’s get back to the Browns game. It’s 3rd and 1 and Bill Cowher sends him into the game. Pittsburgh ran their bread and butter, a trap run to the right with Alan Fancea pulling across the line. Brown was nearly taken down in the backfield when TE/FB Matt Cushing couldn’t hold his block but the back spun off it and over the first down marker. A hard fought two-yard gain.

The Steelers kneeled the ball the next three plays to run out the clock and win the game. Brown was released after the group got healthy, Haynes came back the following week and Staley returned a couple after. Pittsburgh dumped Brown off their practice squad ten days after his NFL debut. He briefly spent time with Cleveland, Buffalo, and Seattle but never recorded another carry.

And that was his time in the NFL and as far as I can tell, football. One carry, one first down.