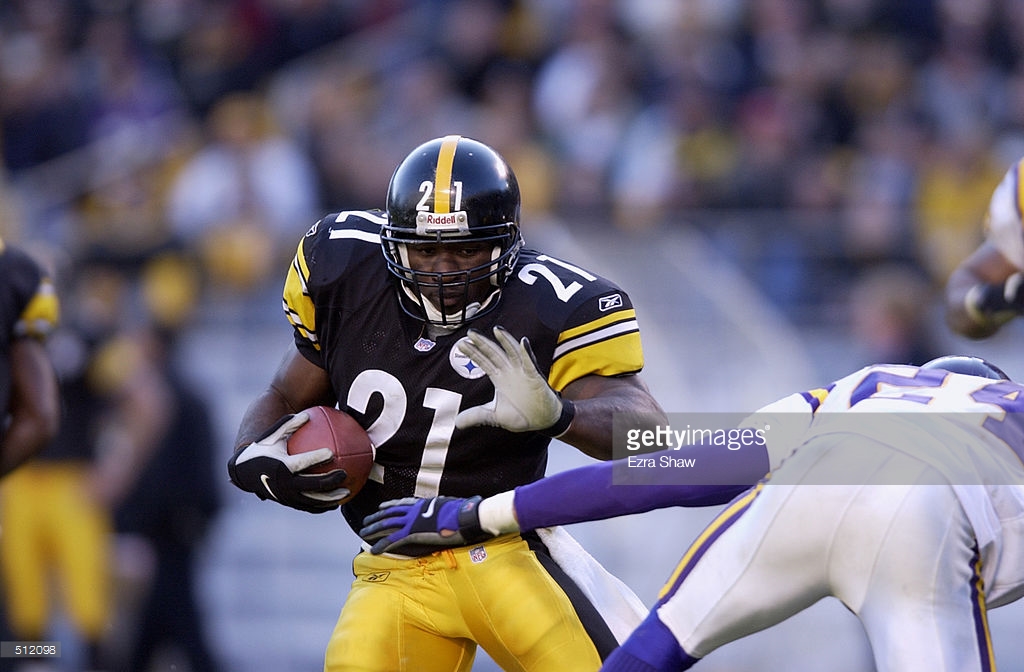 Amos Zereoué, who became known as “Famous Amos” was the change of pace compliment to Jerome Bettis in the early 2000s. The peanut butter to his jelly. Left to his right. Tom to his Jerry. When asked to take on a heavier role, he was less effective, but always strong out of the backfield.

A holdover as Kevin Colbert took the reigns, Zeroué was drafted in the 3rd round of the 1999 draft, the last of the Cowher/Donahoe era before they went all Celebrity Deathmatch on each other and the Rooney’s sided with Cowher. A wise decision in hindsight.

Overcoming a turbulent childhood that got him sent to a group home throughout high school, he had a great career at West Virginia, rushing for over 1000 yards in three straight seasons and in 1997, rushed for a school-record 1589 yards and absurd 8.2 yards per carry. Partly because he made highlight-worthy plays like these.

Heck, his first ever college carry went for a 69 yard touchdown run against Pitt. He ended his time as a Mountaineer as the Big East all-time leader in rushing yards and still ranked 5th before the football conference dissolved, passed up by Avon Cobourne (the man who replaced Zereoué at WVU), Ray Rice, Path White, and Noel Devine.

“I would have liked to have gone earlier, but I’m just glad Pittsburgh took a chance. I’m going to make sure they’re not disappointed,” Zereoue said after getting drafted in this News Day article in 1999.

But his early years in Pittsburgh got off to an invisible start. After two years, he had only 24 total carries and 62 yards, though he got in some sporadic work as a kick returner his rookie year. The most notable part about those early years were for the wrong reasons – he was charged with drunk driving a month into his rookie season.

2001 was a turnaround year for himself and the team, making their first serious run at the Super Bowl in years and starting the trend of doing so throughout the 2000s. He averaged more than 5 yards a carry and found the end zone as a runner and receiver. In the divisional game against Baltimore, he rushed for two scores.

The next year, Zereoué led the team in carries and rushing yards, passing up Bettis, and finished 4th on the team with 42 receptions. He caught 82 over the next two seasons, the versatile run/pass option, even if he wasn’t great at either.

Pittsburgh cut him loose in March of 2004, an expected move after the team signed Duce Staley. He latched on for a year with Oakland, getting some decent burn up there (112 carries) before spending the next year with New England, the year the Steelers ultimately won the Super Bowl. That’s where his football career would end.

He’s kept himself busy since then. He opened up Zereoué, a New York city restaurant, a successful, upscale scene that, based on reviews, had some killer African food. He even jumped in the kitchen to sometimes cook it up himself. I believe it closed down sometime in 2010 after roughly a three-year run.

We touched on it about three years ago but Zereoué picked up a different sport after his football days – soccer. Staying in New York, he joined the Central Park Rangers FC. I’m not sure how long he spent on the pitch and couldn’t find much information beyond that article.

His name has occasionally popped up on the Steelers website so he seems to still have ties to and a decent relationship with the team. Zereoué was inducted into the West Virginia Hall of Fame in 2015. He also completed his degree the same year after leaving school a year early the first time around.

Amos Zereoue, your blast from the past.