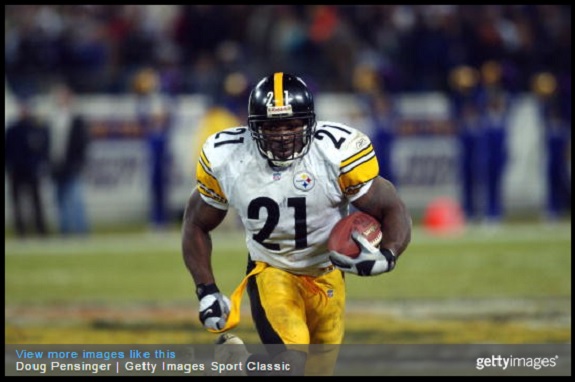 After a seven-year NFL career, six of which he played for the Pittsburgh Steelers, former running back Amos Zereoue has went from scoring touchdowns with his legs to getting his kicks scoring goals on the soccer field. This is actually a sport that isn’t quite new to him, as soccer is Zereoue’s first love, having played the sport since he was a youngster growing up in Ivory Coast in Africa.

“I was a soccer player originally,” said Zereoue, according to Christopher Belacof the New York Times. “But in middle school, all my friends were American football players. So they challenged me to come play ‘the real sport,’ and I was pretty good at it.”

After arriving in the U.S., soccer naturally became a favorite of his, but he eventually gave football a try and obviously it paid big dividends for him.

After years on the gridiron, he says it’s a bit more challenging picking it back up. Now 38, Zereoue has spent some time playing for the Cosmopolitan Soccer League, a semi-pro league based around the New York City area.

As all of us Steelers fans know, Zereoue was a short, not small, runner, listed at 5-foot-8 and a compact 212 pounds, with biceps that engulfed the football. In his best statistical season of 2002, the back out of West Virginia took the lion’s share of the carries, running for 762 yards as Jerome Bettis battled nagging injuries. Now, instead of plowing between the tackles and grinding out tough yards, he gets his kicks in a less physical sport, and instead of being paid, he actually is the one forking over money, as the club has an annual fee of approximately $320.

He admits he actually feels more of an adrenaline rush when he scores a goal than whenever he scored touchdowns.

“Football was nice and I was good at it, but soccer was always my passion,” Zereoue said, according to Belac. “Now I’m out here having fun. The craziest thing is, I felt more pressure playing soccer on Sunday in front of 10 people, than football in front of 100,000.”

As a forward on the Central Park Rangers, Zereoue clearly shows why he was an NFL talent, displaying a burst and quickness, or “that quick running back speed” as Hiyaw G-Yohannes, a teammate of his, refers to. Unlike many soccer players who employ a methodology or strategy, Zereoue simply uses his God-given gifts such as his strength, speed and ability to create separation. His coach, Joe Sullivan, who works on Wall Street, calls his attitude “infectious” according to Wayne Coffey, of the New York Daily News.

After so much time away from the sport, Zereoue knows there’s a bit of rust there. However, he’s doing something he loves and to him, that’s all that matters.

“Football was just get the ball and don’t let them get you, the rest was just logistics and technique,” said Zereoue, according to Belac. “When I came back to soccer, my movements weren’t there yet; positioning is still a challenge to this day. But when I get the ball at my feet I can do some things.”