As you know by now, JuJu Smith-Schuster was reportedly limited in training camp due to a lingering knee injury. He’s apparently also got a busted pinky. Posting a video to Snapchat Wednesday morning, Smith-Schuster showed a picture of his bent finger with the caption “dislocated pinky.” 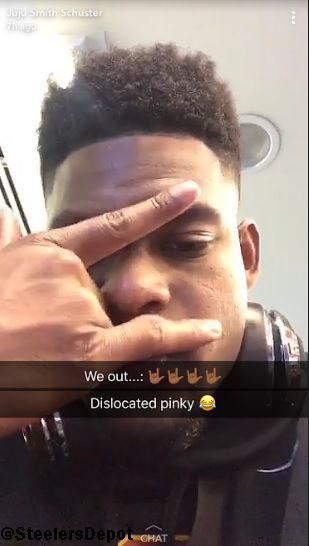 It’s unclear when the injury happened and if it occurred while practicing during the Steelers OTAs/minicamps. While the knee injury limited him, he did appear to get some work in individual drills, a sign his knee should be good to go for Latrobe.

Receivers with mangled hands, frankly, is nothing new. Some of the all-time greats have permanent damage. Torry Holt has one of the worst cases, a picture of which you can see here if you aren’t the squeamish type.

The good news is that Smith-Schuster has a little more than a month to get his finger right, though I imagine he’s not going to be able to catch passes over that span. As long as he can come into camp healthy and ready to go, he’s poised to have a successful sophomore season. Despite multiple injuries last preseason, he still managed to have one of the best rookie years in franchise history, catching 58 passes for nearly 1000 yards and seven touchdowns.

With Martavis Bryant out of the fold, expect a sizable jump in those numbers.