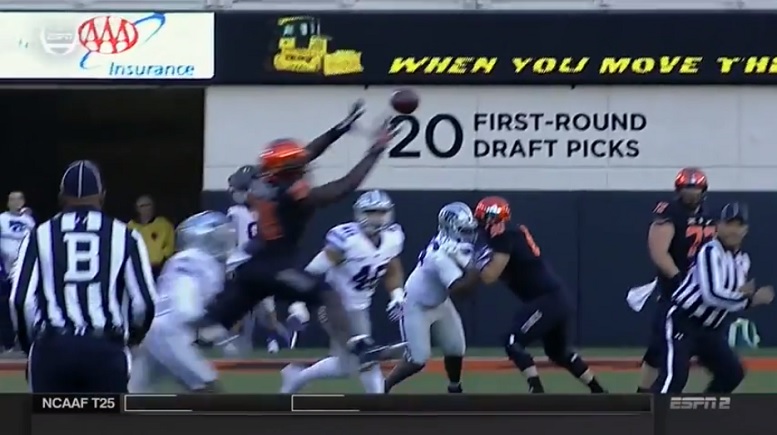 With rookie Pittsburgh Steelers wide receiver James Washington catching 74 passes in 2017 at Oklahoma State, one would think at least 20% of those would have came on third downs. That wasn’t the case, however, as Washington only caught 7 passes for 126 yards and a touchdown in Oklahoma State’s 13 games last season. Just so you know, Oklahoma State’s offense attempted 108 third-down pass attempts in 2017 with quarterback Mason Rudolph being responsible for 102 of those.

Washington, as you can see in the table below, was actually only targeted 17 times in total in 2017 on third-downs. That was just 14.3% of his total pass targets in 2017. Additionally, after having caught all 5 of his third-down targets for 96 yards to start the 2017 season, Washington only caught 2 more third down passes for 30 yards and a touchdown in Oklahoma State’s final 8 games. By the way, that third-down touchdown reception came via screen play to the left side of the field and I can tell you that he did not have many of those in 2017.

The great thing about having contextualized every pass attempt made in 2017 by Rudolph over the course of the last week is that when you sort the results in various ways you begin to see a few trends. For example, look at the context I originally gave the final 12 third-down throws to Washington listed below. 10 of the 12 were either off target throws or defensed passes.

If it makes you feel better, Washington seemingly caught every catchable third-down pass that Rudolph threw him in 2017 and all 7 receptions resulted in successful plays, meaning either a conversion or a touchdown.

While I obviously haven’t contextualized Washington’s first three seasons at Oklahoma State, I do have his third-down stats for you. In 2016, Washington caught 13 passes on third downs for 280 yards and a touchdown. In 2015, he caught 11 third down passes for 209 yards and two touchdowns and in 2014, he caught 5 for 33 yards and no scores.

So, was Washington’s lack of third-down production during his college career mostly due to Rudolph being erratic? We’ll try to answer that question in a future post using Rudolph’s third-down passing stats from 2017.