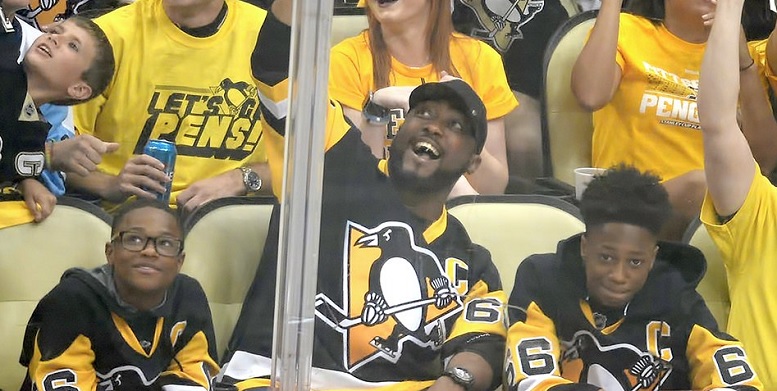 As of writing this, it’s a 1-1 tie between the Washington Capitals and Pittsburgh Penguins after two periods. Hopefully, this article ages well with a Pens’ victory but even if it doesn’t, it wasn’t for a lack of support. Looks like the Pittsburgh Steelers were in full-force to support their hockey brethren. But I don’t think anyone is topping Alejandro Villanueva’s support.

I’ll update this with a better video if/when I see it but WPXI’s Chase Williams has a short clip of VIllanueva, with the camera on him, taking off his short and pouring beer all over himself. I literally don’t think I am capable of adding any other words to that.

Alejandro Villanueva FIRED up for this one! pic.twitter.com/TpAEgWA6bB

Update: here’s another look, courtesy of Steph A Chambers.

Pittsburgh Steeler Al Villanueva takes his shirt off during Game 6 between the Penguins and Capitals. #penguins#pens@PittsburghPG@PGSportsNow@PGVisuals pic.twitter.com/JrMyu1QHB5

Here’s the best video, provided by the Pens’ account.

In slightly more…calm news, tons of other Steelers were in attendance, either in the crowd or in a suite. Here’s Mike Tomlin sporting a Sidney Crosby jersey. Ben Roethlisberger, who said earlier this week he was hoping to get to a game, sat in the suites above.

.@CoachTomlin and Ben Roethlisberger in the house supporting the @penguins. pic.twitter.com/QXhvQrfZrW

Ditto general manager Kevin Colbert, according to this photo.

Clint Hurdle also had this quote prior to the puck dropping. The Pirates are in Milwaukee but plan on keeping a close eye on the score.

Clint Hurdle said the @pirates are watching tonight's game from Chicago. Meanwhile @steelers Tomlin and @TeamJuJu are in the house cheering on the #Pens. As Howard Cosell said, "When you play against Pittsburgh, you play against the whole city." -SK