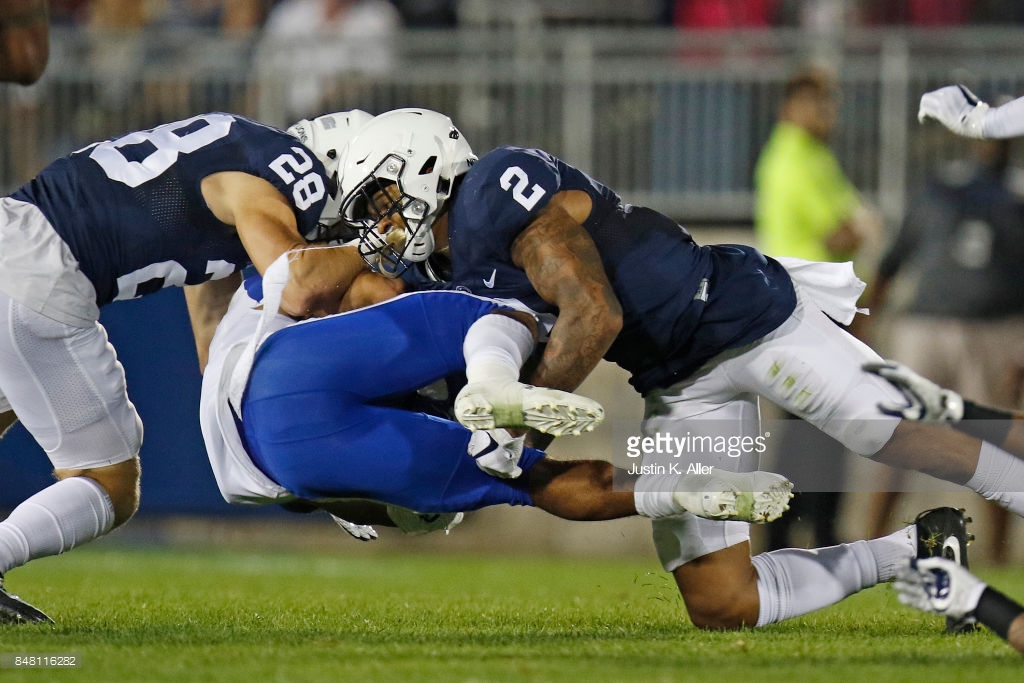 A lot of fans of the Pittsburgh Steelers were probably surprised that the team selected former Penn State safety Marcus Allen in the fifth-round of the 2018 NFL Draft after having previously selected former Virginia Tech safety Terrell Edmunds in the first-round. It should be noted, however, that the two players have quite a few differences in the way they were used in college in addition to parts of each’s game they excel in. While Allen might not be as athletic or position versatile as Edmunds, his ability to play down low in the box effectively as a strong safety in addition to how he tackles, should give him a legitimate shot at making the Steelers final 53-man roster this year.

Ask Allen who he models his game after and he’ll quickly give you a precise answer.

“I would love to say, Kam Chancellor,” Allen said well prior to the draft during an interview on ‘Good Morning Football’ when asked who he models his game after. You know, Kam Chancellor, a very big, athletic safety, has range, is versatile, he can play in the back-end and he can come down and smack you right in the face. That’s definitely who I try to model my game after. I love Kam Chancellor. I look up to him and he actually reached out to me and I was ecstatic.”

While Kam Chancellor, who just so happened to play his college football at Virginia Tech just like Edmunds did, has reached out to Allen prior to the Penn State product starting his career, the 6-2, 215-pound safety has quite a role model to attempt to emulate. Chancellor, who like Allen was a fifth-round selection when he was drafted way back in 2010, has already been a Pro Bowler four times during his NFL career with the Seattle Seahawks. He has also been voted a second-team All-Pro twice so far during his career.

Below is what NFL.com posted about Chancellor prior to the 2010 NFL Draft:

Chancellor has outstanding size for the safety position. Plays with great strength and has the toughness needed to consistently help up in the box in run support. Has been a highly productive player. Durability is not a concern. Exhibits a really impressive motor, refuses to be blocked and plays hard through the whistle. Chancellor can play over aggressive at times, take poor angles and is susceptible to play fakes. Taller player who could improve his pad level. Needs to be lower in his back peddle. Is more comfortable in the box and doesn’t possess the coverage skills, ball skills and instincts to be consistently relied upon against the pass.

As a means of comparison, here is what the same site wrote about Allen ahead of the 2018 NFL Draft:

Allen is a punishing, downhill banger with good size and the attitude of a linebacker in run support. He’s a little limited in terms of his lateral movement and agility and is at his best when allowed to flow downhill. Tape appears to show a lack of long speed and his forty time seems to back that up. Allen’s game is a little limited, but he has the toughness and tackle production of a future starter who does his best work near the line of scrimmage.

Kind of similar scouting reports for these two players, right? Those aside, however, Steelers general manager Kevin Colbert made it very clear after the 2018 NFL Draft ended why the team chose to select Allen even though another safety, Edmunds, had already been taken in the first-round.

“We like Marcus Allen a lot. The safety group was a nice group, but when Marcus was still available in the fifth-round, we felt that we really liked his physicality,” Colbert told the media Saturday night. “Marcus is a guy that knocks people backwards when he hits them and he does it very often. So, to add a kid like him at the fifth-round, even though we had taken one [a safety] in the first, it was a pretty easy pick because he was clearly the highest rated guy we had left at that point.”

During a Monday interview on SiriusXM NFL Radio, Colbert talked more about Allen while talking about how the team’s other safeties now on the roster, Morgan Burnett, Sean Davis and Edmunds, all appear to be very versatile when it comes to being able to play both the free and strong positions in addition to in the slot and even some at inside linebacker.

“Marcus played mainly in the boundary, in the box, for Penn State because that’s what Penn State felt he did best,” Colbert said. “And he certainly is an aggressive defender both against the run and the pass. So, could he fit in and play some linebacker in certain alignments? Sure.”

With the start of Steelers annual rookie minicamp now right around the corner, the coaches will start getting a little better idea as to what Allen may or may not be able to do on defense. Obviously, a lot of negative things would have to happen in order for Allen to see the field on defense during his rookie season, but depth players at all positions are on roster for reasons such as that just the same.

In the meantime, however, Allen’s main focus and goal should be making himself an indispensable special teams player during the rest of the offseason and on into training camp and the preseason. If he does that, he will secure himself a spot on the Steelers 53-man roster and then can start focusing more on becoming Pittsburgh’s version of Chancellor.