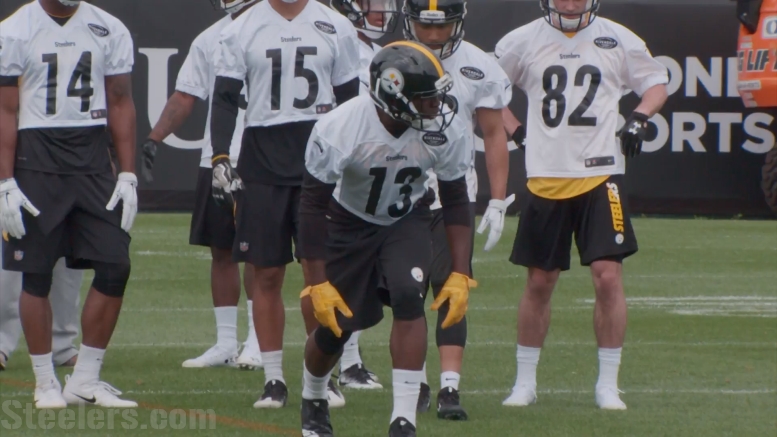 Pittsburgh Steelers quarterback Ben Roethlisberger has certainly worked with his fair share of rookie wide receivers dating back to his own rookie season in 2004. This year Roethlisberger will once again have to quickly acclimate himself with another young wide receiver in James Washington, the team’s second-round draft pick several weeks ago. At the conclusion of the Steelers first OTA practice of 2018 on Tuesday, Roethlisberger was asked to give his first impressions of Washington.

“Well, it’s real early,” Roethlisberger cautioned. “I threw to him a little bit in individual [drills], saw him make a couple of plays. Looks a little raw. Gotta tighten up some things, his arms and some things in terms of kind of wide receiver route running, but, boy, the way he snatches the ball and plays big, It looks pretty impressive so far.”

During his four seasons at Oklahoma State, Washington played a lot bigger than his listed measurements of 5-11, 213-pounds as he not only established himself as one of the nation’s top deep threats at the college level, he also made several combative catches to boot. He also did all of that with most of his production coming with him lined up on the right side of the offense.

After trading away wide receiver Martavis Bryant to the Oakland Raiders during the first day of the 2018 NFL Draft, the Steelers are now hoping that Washington can quickly fill his shoes in three-receiver personnel groupings.

While Washington certainly has his flaws as he enters the NFL level, he should be able to smooth out a few of them throughout the remainder of the offseason as long as he’s able to remain healthy, which is something he was certainly able to do during his college career as evidenced by him never missing a game.