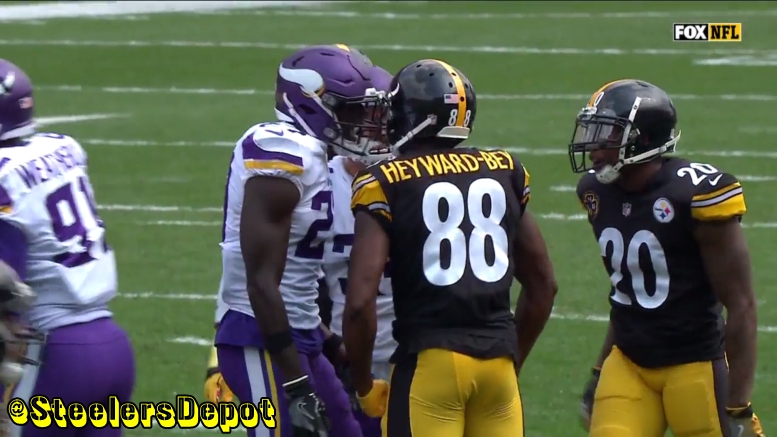 Topic Statement: As of right now, Darrius Heyward-Bey is a virtual roster lock.

Barring some significant change, it’s hard to see Darrius Heyward-Bey not being on the roster in 2018, even if the Steelers only keep five wide receivers, and that could be at least in part due to the evident plan to utilize rookie Jaylen Samuels in that role, who worked out of the slot a lot in college.

While he doesn’t get utilized much on offense, Heyward-Bey is a player that can be used on offense. It’s just that the fifth or sixth wide receiver is not going to see a lot of playing time on any team unless there are a couple of injuries. And he has his annual long rushing touchdown for some reason.

But of course his real value, other than his locker room presence and player-coach role, is on special teams, where he is legitimately a Pro Bowl-caliber performer. One of the top gunners in the league (he forces fair catches rather than tackling the returner because he gets down the field that fast), he is also a big part of the kick coverage as an edge pressure and helps to orchestrate the protection on punt returns.

The truth of the life of an NFL special teamer is that there are very few all around the league who are ever truly safe. If a team feels like they can put that roster spot to better use, then very often, they will do just that.

And the Steelers are likely to bring back everybody from last season as it is, barring the swap of Martavis Bryant for James Washington. Add in the top two and that’s three locks. Eli Rogers is a likely lock if brought back.

Also in the running are Justin Hunter and Marcus Tucker. The latter in particular could be a threat as slot depth. They have told him to work on special teams to make him more valuable. If he can come close to contributing the way DHB does on special teams, that could be it for the veteran.