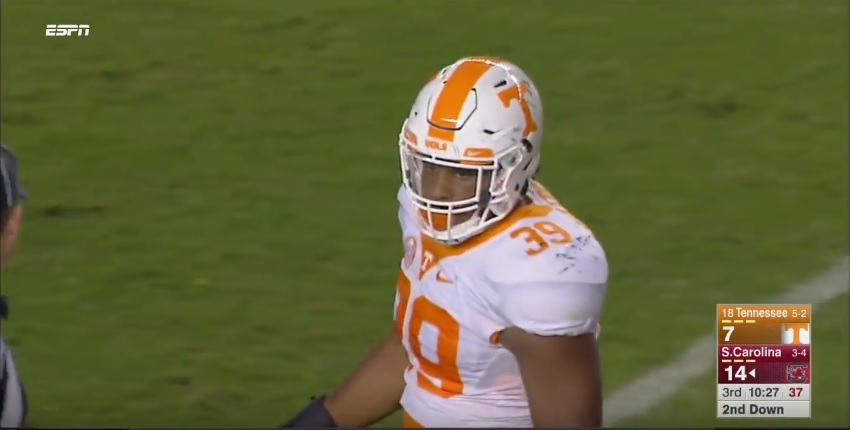 With the draft over and our profiles on all seven of the Pittsburgh Steelers draft picks complete, we’re dipping our toe into the undrafted territory. We profiled a couple of them before the draft but most of the 13, we didn’t. Next, we’re breaking down Tennessee DE Kendal Vickers.

– Good play strength vs base blocks, able to hold the POA and clog up running lanes
– Tough player who dealt with and played through injury
– Fanatical effort and runs after the ball downfield, doesn’t quit on any play
– Lack of height makes for a decent dip/rip that can get under and leverage some guards/centers
– Capable of finishing plays
– Decent hand use to shed blocks in the run game when he plays with proper technique and keeps his eyes up
– Excellent starting experience with decent production
– Regarded as a leader on his team

– Below average athlete in testing and on tape, not explosive off the LOS
– Fails to make an impact as a pass rusher and doesn’t have much of a go-to move
– Struggles to disengage as a pass rusher, two of three full career sacks come versus blown protections
– Has to anchor better against double-teams and down blocks, too easily washed and gives up his run fit
– Doesn’t always get his eyes up firing off the ball in the run game, has trouble seeing blocking scheme and loses fit/ball
– Limited upside

John Mitchell may not be the Steelers’ defensive line coach anymore but Kendal Vickers is totally the type of guy he’d love to coach up. Vickers isn’t going to wow anyone athletically but he plays with toughness and effort that are requirements for this team (and in general, Karl Dunbar demands the same). His effort is what I want to focus on as the biggest highlight of his “good.”

Screen pass in the 4th quarter against Virginia Tech in 2016, Tennessee leading by two scores. Easy to give up on this one but Vickers finds the ball and chases after the back, punching the ball out. Tennessee would recover, score, and rout the Hokies 45-17. Huge play from Vickers.

On the bad side, being a marginal athletes hurts him in so many ways. He’s slow off the ball, not an impactful pass rusher, and isn’t going to make very many impact plays. And despite the strength he has to anchor against one-on-one base blocks, he’s too easily ridden out by double-teams and down blocks. Those aren’t easy to defend, let’s be clear and fair about that, but Vickers has to work on handling them, even if that means collapsing and just filling the hole with bodies.

Two examples, one of each. Here, the right tackle and guard put him on his butt.

And here, the right guard washes his down, the quarterback running through the spot he vacated for a first down.

Like I wrote in the report, two of the three solo sacks he had in college came off blown pass protections. The third, to his credit, was a nice rep against South Carolina’s right guard. But a good, or even ok, pass rusher? You’re not getting that from him.

In his bio, he deserves credit for the leadership he brought to Tennessee, his team-first attitude, totally transforming his body to play wherever coaches asked him to, and the mental toughness to gut out his injuries. For better or worse, he was almost always available, missing just the 2017 Missouri game in his career.

Against Missouri in 2016, he apparently played over 100 snaps as a DT. Which is pretty remarkable.

We’ll see exactly where he lines up. Could make him an end, a nose tackle, or a little bit of both, similar to L.T. Walton. Walton is actually a decent comp for him though for now, Vickers will have to beat out several players to make it onto the practice squad. I don’t rule it out.