Shot #1 – 17 years ago today the 2001 NFL Draft was taking place in New York City and the Steelers had already selected nose tackle Casey Hampton and inside linebacker Kendrell Bell on day-one. Below is what Gerry Dulac of the Pittsburgh Post-Gazette wrote about the selection of Hampton on that Sunday, April 22, 2001. 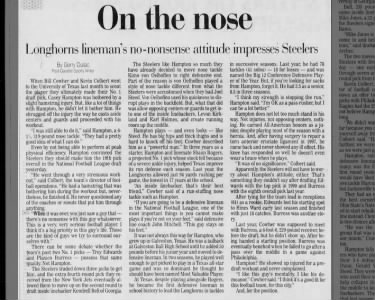 Shot #2 – The 2018 mock draft season is coming to a close this next week and Tim Rohan of Sports Illustrated put together a nice oral history of the phenomenon this past week that’s certainly worth your time to read.

Shot #3 – you may have noticed that Ray Byrne of Pittsburgh was listed very early in that mock draft article and Ed Bouchette of the PPG had an article on him back nearly 11 years ago and you can read it online here.

Shot #4 – BetOnline.ag currently has the Steelers win total line for the 2018 regular season set at 10.5 now that the schedule has been released. The Philadelphia Eagles, Green Bay Packers, New England Patriots, and Minnesota Vikings also all have 10.5 win total lines. As for the rest of the AFC North division, the Baltimore Ravens (8.5) are the next highest behind the Steelers with the Cincinnati Bengals (5.5) and Cleveland Browns (4.5) following.

Shot #5 – Steelers wide receiver Antonio Brown was present at the Central Michigan spring football game on Saturday and Evan Petzold has the details of his visit to his alma mater.

“This is where it all began. I remember being here so much in the summertime grinding when nobody was around.”

Shot #6 – Can college level coverage grades put together by Pro Football Focus predict coverage grades at the NFL level? Eric Eager and George Chahrouri of PFF have a post that attempts to answer that question.

Shot #7 – Finally, former Steelers defensive back J.T. Thomas is celebrating his 67th birthday today. Thomas was selected in the first-round of the 1973 NFL Draft by the Steelers out of Florida State. Here is a link to a PPG article a few days after Thomas was drafted. He played 8 seasons with the Steelers and intercepted 19 passes during that span.