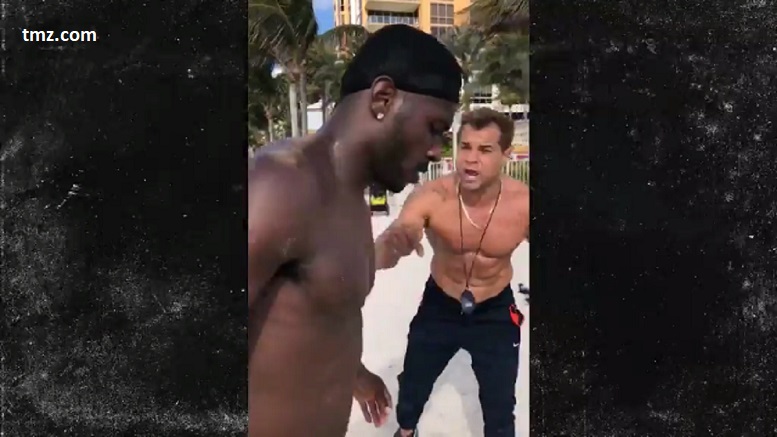 While Pittsburgh Steelers running back Le’Veon Bell is currently busy complaining on social media about being portrayed as a villain of the team, his teammate, wide receiver Antonio Brown, is apparently busy in South Florida training to be the team’s hero once again.

In a video posted recently by TMZ, Brown can be seen going through an intense workout alongside Washington Redskins cornerback Josh Norman on a beach in Miami while a very intense trainer provides some intense instruction and motivation.

As many of you probably remember, Brown split with his long-time personal trainer Bo Smith last year. It’s not yet known who this new trainer in the video is, but he sure seems to be demanding of both Brown and Norman.

As for Bell, he is reportedly about to resume his offseason training in Miami as well. Last offseason he reportedly trained with elite footwork specialist Rischad Whitfield as well as with Pete Bommarito of Bommarito Performance Systems in Miami.

Bell, by the way, apparently wants a contract extension from the Steelers that will average $17 million per season, which is exactly what Brown currently earns after signing his new multi-year contract just a little more than year ago. Brown is currently the highest paid offensive player in the NFL that doesn’t play the quarterback position. Bell, on the other hand, is currently the highest paid running back in the league once again after being given the franchise tag by the Steelers several weeks ago.

Going to do everything to bring Pittsburgh @steelers a ? ! Dedicate my life to train everyday to achieve my goal! I need all you guys to support me and help me make this happen…. This year I want to be a champion…..