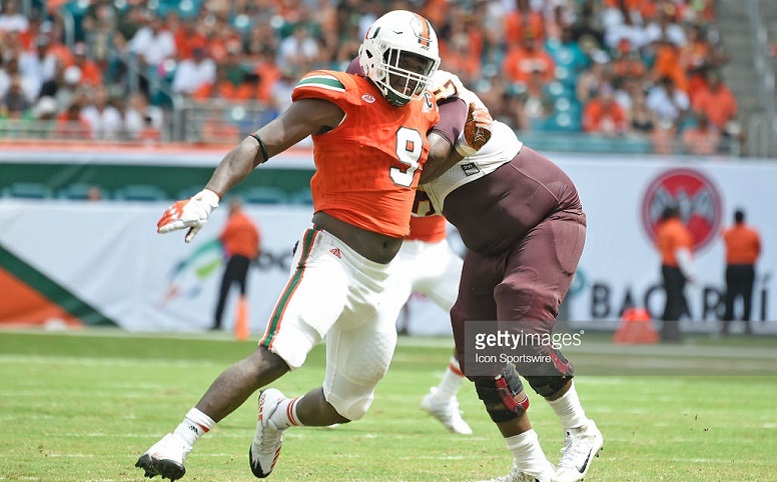 Miami held their annual pro day on Wednesday and at least one coach from the Pittsburgh Steelers was present to observe it.

According to reporter Andrew Ivins‏ on Twitter, Steelers defensive line coach Karl Dunbar was present at the Miami pro day on Wednesday and apparently he led the defensive linemen who were participating in the annual event in their drills.

The top-rated Miami defensive linemen in this year’s draft class are defensive tackle Kendrick Norton, defensive tackle RJ McIntosh and defensive end Chad Thomas. All three are intriguing prospects and especially Thomas, who with some additional weight might make an ideal defensive end in a 3-4 defense, or a 3-4 outside linebacker if he were to drop some weight. He measured in at this year’s scouting combine at 6050, 281-pounds with 33 1/2-inch arms and 10 1/4-inch hands. In his four seasons at Miami, Thomas registered 103 total tackles, 26 tackles for losses, 10 sacks, 7 passes defensed and 2 forced fumbles.

As for Norton, who measured in at the combine at 6027, 314-pounds, he registered 84 total tackles, 18 tackles for losses, 5 sacks, a pass defensed and a forced fumble in his three seasons at Miami. Like Thomas, Norton is expected to be a day-two selection in this year’s draft.

The third defensive linemen I noted above, McIntosh, measured in at the combine at 6044, 286-pounds. He’s also expected to be a day-two selection this year after registering 103 total tackles, 23 tackles for losses, 5.5 sacks, 9 passes defensed and a forced fumble in his three seasons at Miami.