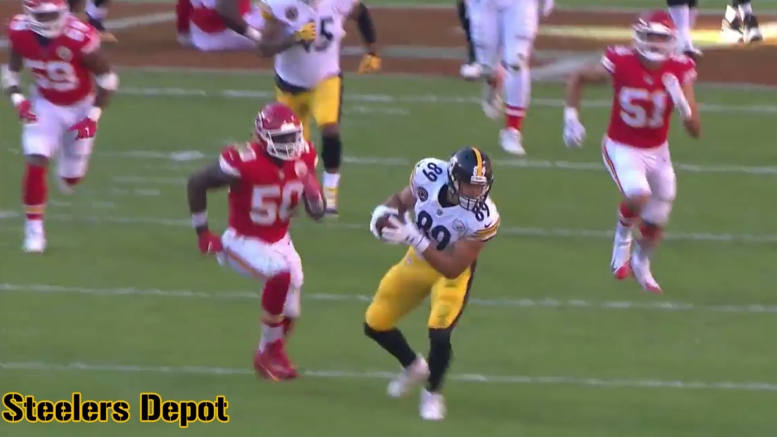 Historically, quarterbacks love to go to their tight ends as a release valve, which is something that happens pretty often. A good tight end is a quarterback’s best friend, and Ben Roethlisberger was lucky to have Heath Miller for most of his career.

Jesse James has been the primary tight end on the field due to health in the past two years since Miller retired, but Roethlisberger has not had the same level of confidence in him. The numbers also don’t support the notion that he should be targeted more. That’s why Ladarius Green and Vance McDonald have been brought in the past two years.

This is not meant to slander James. This is just to make a point. Roethlisberger wants to use the tight end in the passing game, and he has with Green and McDonald over the course of the past two years. He doesn’t have his full arsenal without a playmaking tight end, and here are some numbers that point to that fact.

Let’s start with last season’s numbers. We’ll take the following measurements: total snaps in route (going out for a pass); targets; snaps in route per target; yards per route run; and yards per target. The sample sizes vary significantly, so it’s an imperfect measure, but here are the numbers for James and McDonald in 2017:

As is evident, McDonald was targeted with much greater frequency when he was on the field, and he was also notably more productive per target, averaging nearly two more yards per target than James. McDonald got to share more of the load last season than Green the year before, however:

Green’s sample size is far too small, but his numbers are insane. He was targeted nearly once every three times he went out for a pass, and averaged over three yards every time he did so. While those numbers would regress to a mean somewhat, you can see why Roethlisberger loved throwing to him in the few games he was on the field.

Now let’s take the next step and compare him to some of Miller’s previous years, starting with his final season, during which he was clearly on the decline:

Miller wasn’t targeted much more frequently, nor was he much more efficient per target, than was James in 2016. It was time for him to hang it up, based on these numbers. But let’s go back to some of his better years:

Miller averaged per target in these years about what James averages per catch in his career. He was targeted nearly once every five snaps in route, and produced a healthy number of yard per route run. I’d like to think that these numbers illustrate the impact that a quality receiving tight end could have on Roethlisberger’s game, and why McDonald right now is important.

Bonus: since I’m sure somebody will point out that the Steelers missed the playoffs in those seasons, here is Miller’s numbers from 2010 and 2008: