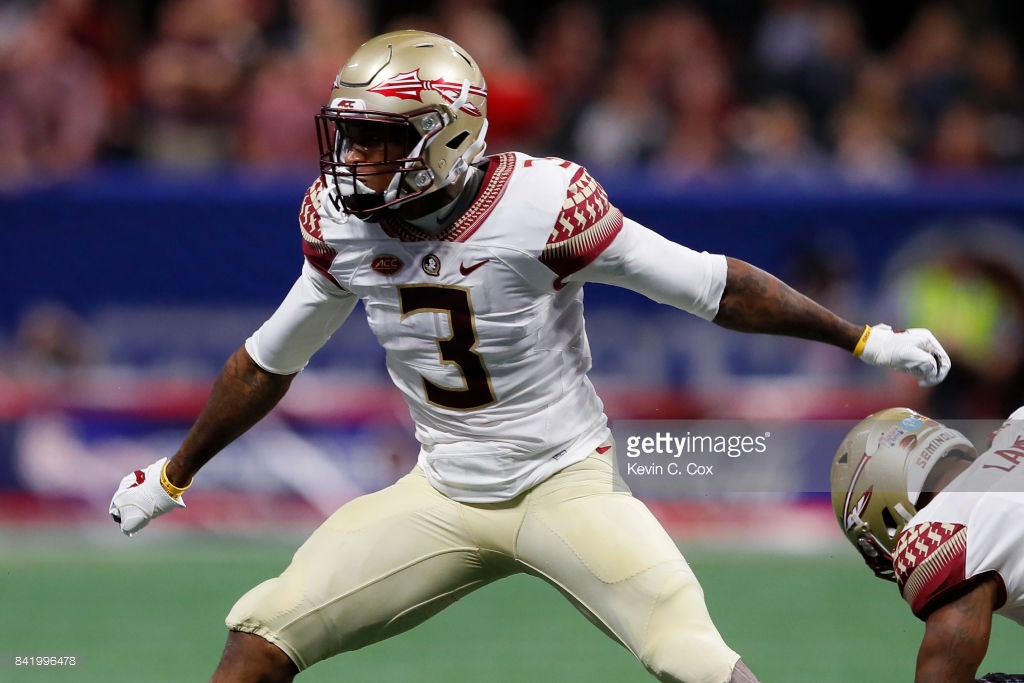 Your 2018 NFL Combine is in the books. Went out on a high note with some blazing fast times from the corners and safeties. We know the Pittsburgh Steelers need a safety so let’s talk about them and the corners who worked out today at Indy.

Heads up, we’ll do a recap of the whole weekend and do a winners/losers for tomorrow morning. Put a bow on this thing. Thanks for following along.

– Lot of impressive corners out there. The guy who kicked everything off might have been the nicest one of the group. Louisville’s Jaire Alexander ran 4.38 and looked as fluid in his turn as anyone during drills. Quick click and close. Junior who picked off five passes his sophomore season who missed about half the season with injuries last year.

– Thought Duke Dawson was more quick than fast on tape but a 4.46 40 hints at both. He can gamble in coverage but a top five nickel corner in this year’s class. UNC’s M.J. Stewart is another one of my favorites. Lots of people like Tennessee’s Rashaan Gaulden, though he didn’t run well (4.61) who lacks length. Don’t have his agility drills yet – those will be important, especially for a slot guy.

– Mike Hughes…not as fast as I thought (4.53). Maybe I had him pegged wrong. Workout was good, not great.

– Danny Johnson, who we profiled yesterday, showed he’s up to snuff hanging with the top competition. Southern corner who had a high level of production with quick feet and one of the few guys to actually show speed in his backpedal. So many guys went through half-speed in it and the coaches got on him for it. He helped himself out.

– If there was an injury reason, it’s fair to give him a pass but I can’t for the life of me think of any other reason why Dubuque’s Michael Joseph would not run the 40. He went through other drills so it’s not like he sat those out for injury reasons. This is the big stage. I’m not sure what his Pro Day plans are, where he intends on working out, but I doubt he’s going to have 32 teams and every GM watching him in a couple weeks. It concerns me.

– JaMarcus King didn’t have a strong Senior Bowl showing. Then he runs a 4.7 flat today. Bad, bad news, especially for a dude who weighs just 185 pounds.

– Isaac Yiadom’s 40 time was…ok. I thought he would be in the 4.4’s. A decent day but nothing spectacular.

– Weird day for Josh Jackson. Twice in one drill, he was stopped by the coach and reset. Happened again in the W drill. Very tall, stiff-hipped, and seemed completely unsure of himself, moving at barely half speed and constantly had to be reminded to pump his arms. He found the ball well and that’s his calling card (8 INTs last year) but he looks like a zone-heavy guy only.

– Bama’s Levi Wallace should be praised for his work ethic (Alabama walk-on) but thought he was tight-hipped and below average speed (4.63). Not a guy I’m crazy about.

– Don’t know much about his game by liked the way Kansas State cornerback D.J. Reed attacked the ball. Looked comfortable high pointing the football. Looking at his stats as I type and it’s no surprise to see him pick off seven passes in only two years. Left with a year of eligibility left.

– Didn’t think the two Toliver’s had great days. Henre’ and Kevin. The former weaving too much in his pedal and the latter too slow doing it.

– As of this writing, still not seeing official 40 times and nothing in the other testing (broad, shuttle, etc). NFL Network didn’t show much coverage so I’m not going off a ton of information here, unfortunately.

– The guy I mocked to Pittsburgh in the first round, before he ran, turned in one of the best times. Justin Reid, 6’0, 207, ran an (unofficial) 4.4 flat in his second go. 4.44 the first time. Definitely has the athleticism to be a rangy centerfielder.

– Safety group as a whole ran faaaaast. Unofficially, nine of them ran sub-4.5. Really impressive (I generally put the benchmark at sub 4.6). Penn State’s Trey Apke came out of nowhere to run an official 4.34 and 41 inch vert. Only one year of production and it wasn’t great production at that (54 tackles, 1 INT). Wonder how he even got the invite but glad he did.

– Northwestern’s Godwin Igwebuike ran well in a straight-line but thought he was tight trying to flip his hips and get depth.

– Tape confirmed it for me but the 40 just piles on. After running a 4.66, Kameron Kelly is going back to safety.

– Happy to see DeShon Elliott’s time. Looks to be under 4.6 – about what I expected.

– Wanted to see Armani Watts run today. He worked but out didn’t do the 40. Thought he would be fast. Maybe he was worried he wouldn’t be. Ditto Kyzir White. Disappointing end.