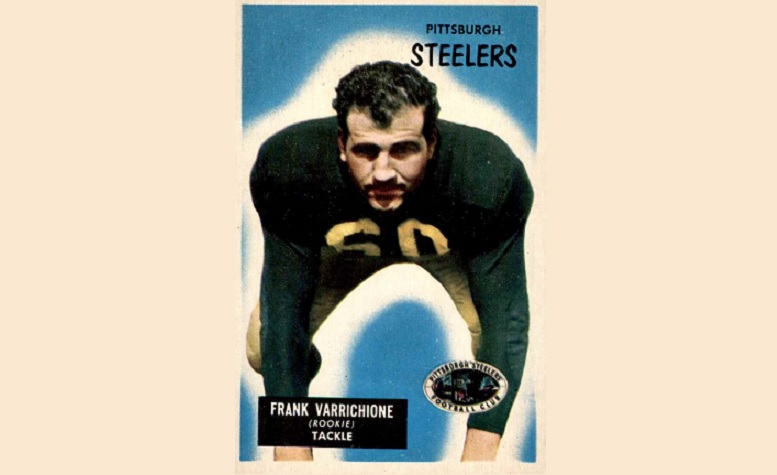 Frank Varrichione, a former first-round draft pick of the Pittsburgh Steelers, passed away on January 6, 2018, at the age of 85.

Varrichione, who was selected sixth-overall by the Steelers in the first round of the 1955 NFL Draft out of Notre Dame, played six seasons as a right tackle in Pittsburgh and was a Pro Bowl selection four times during that span. He was traded to the Los Angeles Rams in 1961 and played five more seasons for them and made the Pro Bowl again in 1962. 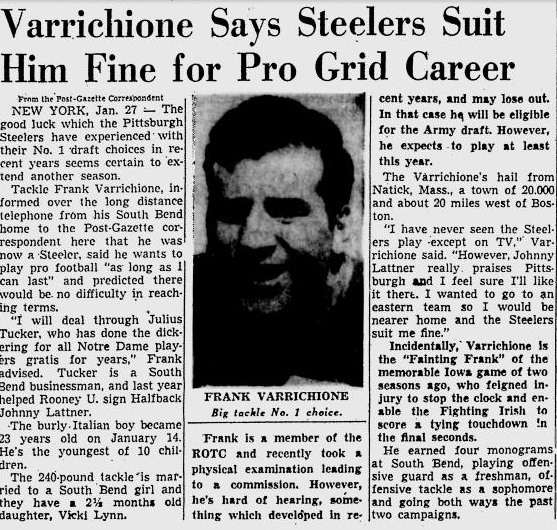 Up until 2011 when current Steelers center Maurkice Pouncey made the Pro Bowl, Varrichione had served as the last rookie Pittsburgh offensive lineman to receive that postseason honor.

“One of my biggest thrills was being selected to play in the Pro Bowl after my rookie year of 1955,” Varrichione said in 1999, according to Jim Sargent of The Coffin Corner. “That sticks out in my mind as quite an accomplishment. I went to the Pro Bowl four times with Pittsburgh, and I played in the Pro Bowl on the West Squad after the 1963 season.”

According to Sargent, Varrichione signed with the Steelers in 1955 for $8,000 and at the time that was considered a good salary for an offensive lineman. His best contract, however, came as a member of the Rams as they reportedly paid him $20,000.

As far as Varrichione’s college career at Norte Dame went, in addition to being remembered as a great offensive lineman, he also is remembered as “Fainting” Frank Varrichione. He earned that nickname for faking injuries to stop the clock twice against Iowa during the 1953 season, enabling Notre Dame to salvage a tie.

Varrichione, who reportedly stood 6’1″ and never weighed over 240 pounds, was a very respected offensive linemen while playing in Pittsburgh and that is evidenced by a quote from the great Ernie Stautner, a Steelers Hall of Fame defensive linemen.

“In all the years Frank played for the Steelers, he was very seldom beaten outright. He had the respect of all the defensive linemen who played against him,” Stautner once said.

While Varrichione is not currently in the Pro Football Hall of Fame, he was selected to the Boston Chapter of the Italian-American Sports Hall of Fame in 1995. In 2007 he was named to the Steelers “Legends” Team.

“I never made the Hall of Fame,” Varrichione reportedly once said, “but for a short while they used to have a film clip in Canton to demonstrate how to pass-block, and I was the blocker. I had a good friend who told me about it. I do have some very good memories, and I wouldn’t trade those for anything.”

It seems like Varrichione provided several good memories for Steelers fans during his playing days and it also sounds like he was one of the team’s first great offensive linemen. May he rest in peace.

Below are some great links if you would like to learn more about Varrichione’s life and football career and we have an interview with him going up next week so be on the lookout for that.
Frank Varrichione Obituary
FRANK VARRICHIONE: All–American and Pro Bowl Tackle
Golden Memories – The 1953 Notre Dame team celebrates the 50th anniversary of winning the national championship.
Frank Varrichione Stats
Frank Varrichione On Wikipedia
Varrichione Says Steelers Suit Him Fine for Pro Grid Career