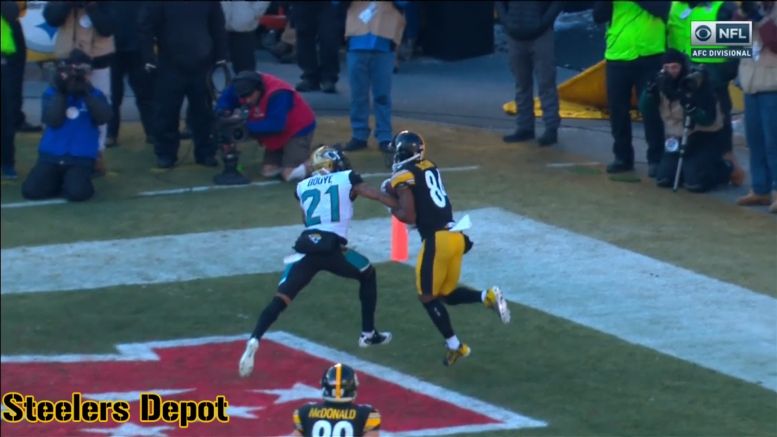 This one had the makings of a blowout. Many thought it would be the Pittsburgh Steelers blowing out the Jacksonville Jaguars. It was nearly the other way around, and was only saved from such courtesy of some spectacular individual efforts from the Steelers’ first-team All-Pro skill position players, whose play reflected their financial compensation on the day.

The conversation has to start with wide receiver Antonio Brown, who had not played since the second quarter of the Week 15 loss to the New England Patriots as he attempted to haul in a deep touchdown pass. He suffered a significant calf injury in that game, and only seriously returned to practice this past week.

Even late into this morning, there were mixed reports about his health, with the ultimate conclusion being that he would ‘give it a go’. He did that and then some, catching seven passes for huge plays. He picked up 132 yards on those seven receptions, two of which went for deep touchdowns in desperate times.

Brown scored the Steelers’ first points of the game while they were already down by 21 points. From the Jaguars’ 23-yard line, Ben Roethlisberger connected with his favorite target in the back left corner of the end zone, making an incredible catch over the head of A.J. Bouye, who had tight coverage, giving up his first touchdown of the year.

The first-team All-Pro receiver would get the second-team All-Pro cornerback again late in the game, this time in far more absurd circumstances. The Steelers trailing by 14 with under 11 minutes to play in the fourth quarter, it was fourth and five when Roethlisberger heaved a pass to Brown, making the grab down the left sideline with Bouye on him.

Two of the Steelers’ other four touchdowns came from the other Killer B, Le’Veon Bell, who may have played his last game as a Steeler, depending on how the offseason unfolds from this point forward. While he gained 67 yards on the ground on 16 carries, he added another 88 receiving yards on nine receptions.

And that included a truly spectacular receiving touchdown from 19 yards out, on third and nine. Working against athletic second-team All-Pro linebacker Telvin Smith in close coverage, Bell reached back toward the in-side of the field working down the right sideline for the touchdown grab.

He scored yet again with just over two minutes to play from nine yards out. Roethlisberger looked to scramble, but as he did tossed a backward pass—that is, a lateral—to Bell, who weeded his way through the defense for the score.

Both Brown and Bell came up with big plays throughout the game. Bell had three explosive plays, as did Brown, combining for 287 yards on 32 touches and four touchdowns on the day. Without these incredible performances from incredible offensive talents, this game would not have been close to competitive.