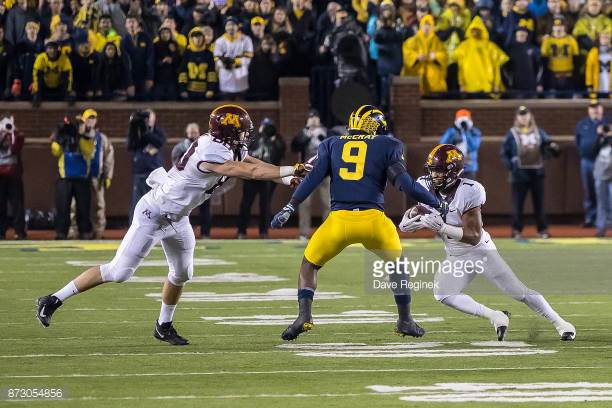 The 69th Reese’s Senior Bowl had their annual media day yesterday afternoon. The best chance of the week to talk to the players and find out more than just what they show on tape. Throughout this week and next, we’ll break up the interviews between some feature articles and some that are just transcript. For this one, a transcript of my interview with Michigan LB Mike McCray.

Q: Take me through the week. New scheme, new playbook, but how are you adjusting to things?

A: I think I’m adjusting very well. Just coming out here, enjoying it. You only get this opportunity one time. Just to come here and prove what I’m about. And enjoy the moment.

Q: On tape, you’re an instinctual player and made a ton of plays. Where does that come from? To read the play before it happens. Is it film study or a instinct you’ve always had?

Q: Pre-snap or right after the snap, what are you reading? The interior guys, the tackles, or the running back? What’s your progression of the play?

A: It depends on the type of formation…look at the guard most of the times. If he’s pulling or not, you can sometimes tell. Certain formations from certain teams will tell you things. I just try to go back to the film work I did and preparation during the week.

Q: Michigan moved you around a lot. You were inside, you walked out a lot. Do you think versatility is something that’s going to give you a leg up on other guys?

A: I believe so. I can play any linebacker spot. Or any position period. Michigan prepared me for that, the type of scheme that we play. So I look forward to the opportunity.

Q: You were a physical player as well. Does that come naturally?

Q: Can you tell me about Don Brown? One of the top defensive coordinators in college football. The schemes that he has, all the adjustments he makes. What’s he like to play for?

A: He’s great to play for. I’d say the first thing he does, he connects with the players first. Everybody on our team respects him. He gets the respect that he deserves. We all love playing for him because his defense is really aggressive. You don’t have to think a lot. You just have to go out there and have fun and play hard.

Q: What about Coach Harbaugh?

A: He’s intense. He gets us ready for the game. We practice hard, we lift hard. He also cares about us off the field. He connects with us as well. So it helps us as players be able to play for him.

Q: Do you consider yourself a three down linebacker? Some people might say you’re not the most athletic guy, might not be able to cover. But you did that in college.

A: I believe I am. But like I said, whatever the team needs, I’ll do it.

Q: You guys blitzed a good bit. Do you like to rush from the edge or the interior on stunts?

A: I did a lot of both. I don’t really have a preference.

Q: Were you the playcaller for Michigan?

A: Yeah, the WILL and the MIKE positions. The two inside linebackers. It was interchangeable.

Q: So you have experience being the signal caller, communicating?

Q: You’ve met with teams so far. Has Pittsburgh come up?

A: They came up to me and talked to me the other day, yes.

Q: Did they say if they were going to meet with you later in the week?

A: They didn’t say anything about later in the week.

Q: Was it a scout who came?

Q: What did the scout say to you?

A: I have a little questionnaire. Hopefully they’ll come back and talk to me.

Q: What do you know about the Steelers defense?

A: I know they’re aggressive, getting after it, and they fly around. You can see that in the playoff game. It’s cold up there a little bit. But they have a great history. Six Super Bowls. A great history. One of the top organizations.

Q: What are you looking to prove during Senior Bowl week?

A: I just want to prove my versatility. Prove that I can be a leader. Just show the player that I am. Just come out here and have fun.

Q: Do you know if they’re going to have you playing outside or just inside?

A: Right now, I know I’m just inside. I don’t know if they’re going to move us around at all. Right now, I’m playing inside.