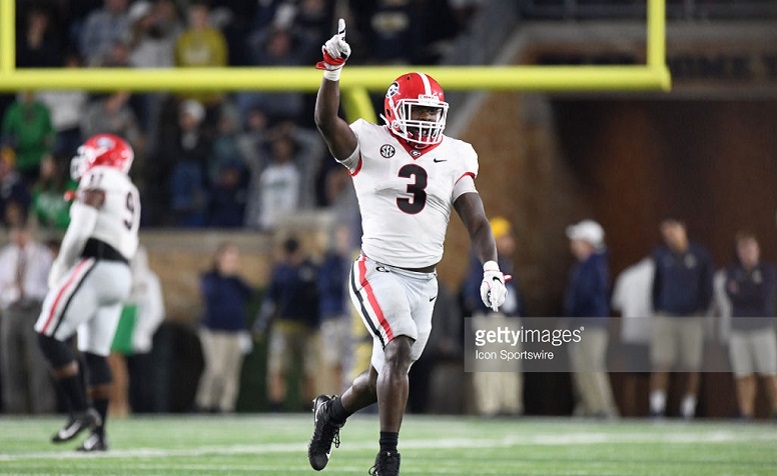 The National Championship game will be played later tonight. An SEC matchup between #3 Georgia and #4 Alabama will determine what team is considered the best college football team in the country. There are a handful of draft prospects in this game that may fit the mold to possibly be drafted by the Pittsburgh Steelers. For the record, a guy like Alabama cornerback/safety, Minkah Fitzpatrick will not make this list (even though the Steelers may be looking to draft a safety) because he is likely to go in the top-10. The chances of the Steelers trading up that far are slim to none. Here is a list of guys to watch closely during the big game Monday night.

Smith will most likely get picked in the top-20, but there is always room to hope that a guy of his caliber will slip through the cracks. We aren’t sure what is going to happen with Ryan Shazier and Smith has the potential to play every down as an inside linebacker in the NFL. Smith is a fantastic run defender whose speed allows him to get from point A to point B very quickly. He has done an impressive job throughout his career in man coverage against running backs and tight ends, but also has the ability to drop into zone coverage. He fits the mold of a Pittsburgh Steelers, hard hitting, quick reacting linebacker with great instincts.

Bud Dupree has been far from consistent and General Manager, Kevin Colbert is constantly looking to bolster the linebacking core. Carter  will most likely be selected in between the 2nd and 3rd rounds which makes this a possibility. He has the potential to be a serious pass rusher in the NFL and turnover-causing machine. Finding a player to compliment T.J. Watt could be deadly to opposing offenses. Carter should be a second day draftee which means he could be available later in the second round for the Steelers.

The Steelers only have Mike Mitchell locked up for one more year and neither him nor Sean Davis played up to expectations this season. The is one of the Steelers weakest positions with Robert Golden not providing much this past season either. Sanders is a mid-to-late round pick, but his instincts and cover abilities as a safety are intriguing. He also has had 16 interceptions throughout his career. Sanders has been superb reading the quarterback’s eyes and attacking the ball when it is thrown. His downside is his tackling ability as it is not up to NFL standards.

The Steelers are almost certain to lose Chris Hubbard to free agency. Hubbard has been a terrific 6th lineman for the Steelers and bringing in a young guy in with potential may be discussed. Wynn is dependable as both a run and pass blocker. He is a bit smaller at 6-2, so if the Steelers are looking to explore projectable tackles specifically, he may not be the guy for them. Wynn could move inside to guard in the NFL.

Harrison has the skill set to be a ball-hawking safety who lurks 20-30 yards from the line of scrimmage. The Steelers have left Mitchell out there plenty of times over the past couple of years and, occasionally, his awareness and reactions haven’t been great. Harrison has shown great recognition skills in college and the potential to be a hard hitting safety who also isn’t afraid to creep up towards the line of scrimmage and make plays on runs.

As stated above, we are not entirely sure what is going on with Shazier. Evans could fall into the Steelers lap as he is projected a late 1st or early 2nd rounder. Evans is very quick and has the ability to contain the middle of the field. He has great tackling ability and impressive instincts. He originally played on the edge and is still perfecting the linebacker position. This might be a risk for the Steelers to take him because of the 4-3 scheme. But, when were the Steelers afraid of the challenge to develop a young linebacker with potential?

Competition at the cornerback position would be very beneficial. Joe Haden should be the No. 1 corner next season, but it could be argued that Artie Burns, Cameron Sutton, Mike Hilton, Coty Sensabaugh, William Gay, and Brian Allen are all in limbo after that. Averett has the abilities to excel in man coverage in the NFL. He is extremely fluid and has elite speed. Due to each Steelers cornerback having at least one more year on the contract, this isn’t all that likely, but he is someone to keep an eye out for.