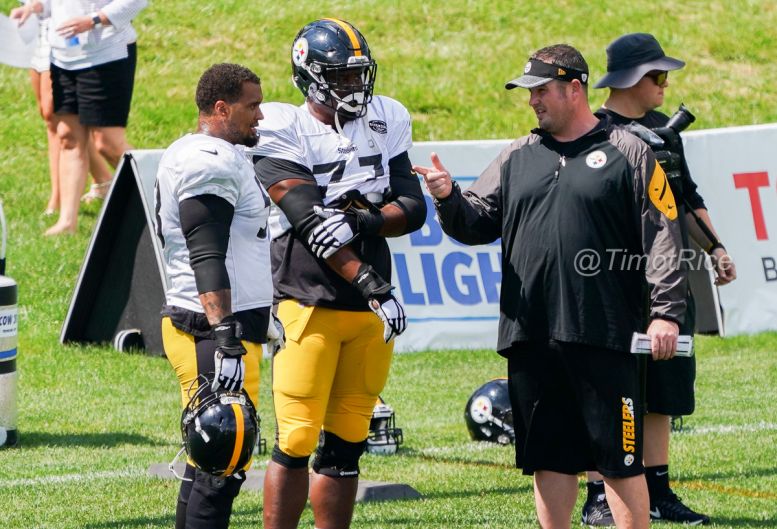 Mike Munchak has been fantastic. The best. Something of a godsend to the Pittsburgh Steelers. There literally aren’t enough words to praise the job he’s done. Make him the Pope? I’m cool with that, your holiness, Mr. Munchak.

But if he goes to the Arizona Cardinals, or anywhere else, the world isn’t going to end. The Steelers’ offensive line isn’t going to collapse in on itself like a black hole. As I’ve mentioned before, here and on Twitter, Pittsburgh has a perfect Plan B.

That Plan B? Shaun Sarrett. A dude you probably have never heard of. But he’s the logical and easy guy to replace Munchak. That’s him in the above picture. Get to know that face. Because he’s probably the guy who will replace Munchak.

Sarrett is finishing up his 6th season as a Steeler, his first NFL stop after time at Marshall – not too far away from Kent State, his alma mater – and a couple years at Duke. Mike Tomlin hired him in 2012 and under Munchak, Sarrett has been his right hand man. He’s a quality coach and well-liked and respected by those who have been around him.

In fact, if it wasn’t for Munchak being available after the Titans canned him after 2013, Sarrett would probably be the team’s line coach today. Sarrett also interviewed for the job but was predictably beat out by Munchak, who had a resume and Hall of Fame history no one was going to be able to match.

That’s not to say Sarrett hasn’t coached the Steelers’ offensive line before. By most accounts, he was running the show in 2013. That year, the team hired Jack Bicknell Jr. to replace Sean Kugler, a very good coach who took the head job at UTEP.

Bicknell Jr. was a disaster. The line stunk, ranking 29th in yards per carry, and Ben Roethlisberger was sacked 42 times. Kelvin Beachum was once asked what he liked about Bicknell and sheepishly replied, “Well, he’s funny.” Maybe Bicknell can do a tight 15 at the Friday night comedy club but that’s not a ringing endorsement to coach offensive line.

It was one of Tomlin’s worst hires and he was canned after the year. Mid-season, with it already proven Bicknell wasn’t up to the task, Sarrett essentially took over the offensive line and ran the unit. The group immediately improved.

That credit should go to Sarrett. He’s already shown what he can do and with a much less talented front five. Here’s a tweet from Gerry Dulac back in early 2014 when Sarrett was interviewing for the job, evidence that he took over that year.

#Steelers interviewing offensive assistant Shaun Sarrett to be offensive line coach. Only natural. He's been doing it for couple months.

You don’t often hear his name anymore but the players know how good of a job he’s done. Alejandro Villanueva included him in an interview in November of 2016, disappointed in his own play “because guys like [Mike] Munchak and [Shaun] Sarrett stay up to 2 in the morning on Monday and Tuesday breaking down film and doing a lot of hard work to get us ready for our opponents.”

I spoke to UDFA Ethan Cooper last summer, who said Sarrett works with the line just as closely as Munchak does and is a “key person” in that locker room.

Watch the two work at camp and it shows there’s essentially no hierarchy. Often, the line would be split up into two groups, tackles and interior linemen or starters and backups. Munchak would take one group, Sarrett the other, to go through position-specific drills without wasting time and getting closer attention and better coaching. It wasn’t one man coaching a 16 player camp roster. Cut that number in half and it became a much more effective way to teach and practice. And shows the level of trust in Sarrett to do his job.

He’s been on the road during draft season too, making appearances at various Pro Days, including Duke and Auburn, based on what we’ve been able to gather over the years.

My last example. Munchak was asked to teach at the C.O.O.L. clinic this year in Cincinnati, Ohio. It’s *the* place for offensive line clinics. Munchak had a fantastic presentation but brought Sarrett along as his right hand man to help him roll through clips. Point is, they’re pretty tight, and I’m sure Munchak would offer his full endorsement for Sarrett to be the next man up.

No one wants to see Munchak leave. Doing so isn’t going to make the team better. I mean, duh. But the Steelers are in about as good of a place as possible to replace him. Name Sarrett the candidate almost immediately after. He’s already proven he can do the job and is respected by everyone in that room.

Pittsburgh’s offensive line won’t collapse. Munchak did his job. Developed the talent, built the group up. Villanueva, Marcus Gilbert, David DeCastro, none of those guys become less talented because Munchak has been stolen away by Arizona.

On name value, seeing Munchak go somewhere else is going to feel like a punch to the gut. But it’s not nearly as devastating sounding as reality. Unless Munchak lures Sarrett to Arizona with him. Then I’ll meet you in the panic room.