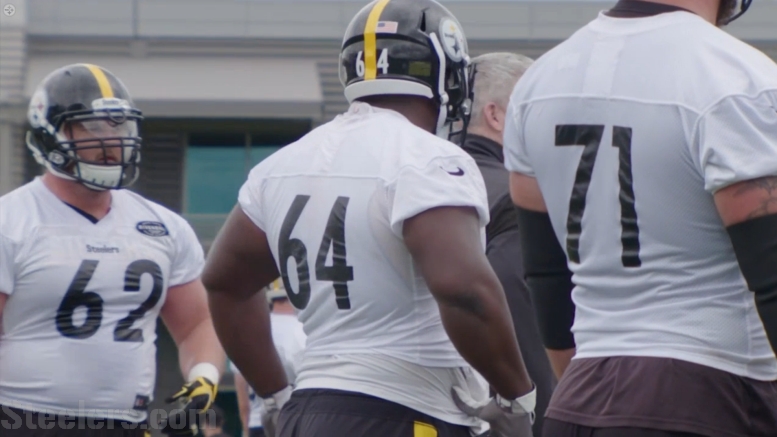 Now, he’s been welcomed to a new family in the NFL.

It’s a journey not many would’ve expected for Cooper coming out Central Dauphin East High School, ten miles outside of Harrisburg. Despite being big on talent, and the size to match, he didn’t qualify for Division One schools. It was IUP, and practically every school in the Division Two PSAC, who came knocking.

“A lot of Division Two schools started hitting me up,” Cooper told me earlier this week. “Both of my older brothers were actually students at IUP so I was already familiar with the school. Once I took my visit and just saw how the program was, I felt like that was the best place for me.”

Turning out to be the right choice, Cooper excelled for the Crimson Hawks. By his sophomore season, he was the team’s starting guard and a mainstay on the offensive line for the rest of his career. Last season, he earned All-American honors. That didn’t come at guard but right tackle, where the team decided to move him.

Cooper admits he wasn’t completely comfortable with the switch but true to a linemen’s nature, he put team above himself.

“But I knew once I moved to tackle, it was the best thing for the team. The transition wasn’t too rough for me. Getting reps at it, making sure I try to perfect it. I had to do what I had to do to make sure the team was successful.”

Success followed with IUP going 10-2 and winning a playoff game.

Division Two, on its surface, isn’t synonymous with NFL prospects. The PSAC serves as an exception, littered with NFL names. Andre Reed the most famous, out of Kutztown. Brent Grimes and John Kuhn attended Shippensburg, Clarion recently put Julian Howsare into the league, and for an offensive linemen like Cooper, Bloomsburg’s Jahri Evans is the gold standard.

Playing in the NFL became real to him at the end of his junior season when scouts began to buzz around campus to get his measurements. At 6’3, 322 pounds and nearly 33 inch arms, he passed the test. By his senior year, NFL teams were making regular appearances and Cooper knew he had a legitimate chance to make the jump.

“Once I came back in the fall my senior year, I saw a lot of teams showing up, watching film, interviewing me and asking questions. That’s when I thought I had a legitimate chance.”

He parlayed that strong senior season into a Combine invite, one of only three offensive linemen from the D2 level selected.

“Oh man, I was super excited. I was very humble an fortunate to have the opportunity. And honestly, I was just ready to get there to display my talent and show what I was made of.”

It was a long four day process, Cooper says, but a necessary one to show off his skills in front of the entire league. He didn’t meet with the Pittsburgh Steelers at Indianapolis but the team kept in touch with him throughout the season. He worked out at Temple’s Pro Day March 8th, where the Steelers sent scouts, and talked to them following his workout.

If we’re being honest, it was a coin flip if Cooper was going to get drafted. Prepared for either outcome, his focus was simply on getting into the league, taking that next step, and proving he belonged. Undrafted, he chose to sign with the Steelers despite several other offers.

You can thank Mike Munchak for that.

It was Coach Munch, the offensive line whisper, who closed the deal. He made a personal pitch to Cooper during the draft.

“He did call me and tell me he was really interested in having me with the organization. I felt as though once that happened it was solidified for me.”

Despite the Steelers boasting one of the deepest offensive lines, Munchak’s Hall of Fame resume drew Cooper to the city. Spending a few weeks with him has already changed the way he approaches playing guard.

“He’s played a huge role in a short amount of time. Since Day One when I came in to now, getting ready for Latrobe now, I feel like I’ve learned so much from him technique wise. And mentally. How to process everything faster. Coming from Division Two school going to the NFL, the game speed is a little faster, things move a little quicker. He’s been helping me mentally get prepared for that. He’s just amazing, honestly.”

One of Munchak’s core beliefs in for linemen to stay square in everything they do. A message Cooper hears day in, day out.

It isn’t just Munchak providing leadership either. Shaun Sarrett is his right hand man and may have become the team’s offensive line coach had Munchak not been available. Sarrett works with Cooper just as closely as Munchak does and Cooper considers him to be a “key person” in that locker room.

Despite the high level of competition within the offensive line, there might not be a more close-knit unit than the big men up front.

“Just walking into the building every day. It’s,” Cooper said, pausing to gather his thoughts. “I’m very humble for the opportunity. Being there, you can tell everyone is very comfortable around everyone It’s very family-oriented. Everybody is there to reach the same goal. To win a Super Bowl. I felt going in it’s a great organization to play for. The tradition they have there is amazing. And I love being apart of it.”

With a self-proclaimed chip on his shoulder, Cooper enters training camp as the best undrafted player on the roster and a strong chance to make the practice squad. He confirmed working at both guard spots during the spring, a plan he expects to continue at Latrobe.

It was Cooper’s mother who encouraged him to play not just football but a mix of sports growing up. Basketball and track and field were part of his life in high school. Football stuck, a sport he’s been playing since he was four. Cooper gives her the credit for raising him the right way and teaching him how to be a man.

Family got him into football. Family paved the way to IUP. Now he joins his football family. The Pittsburgh Steelers.