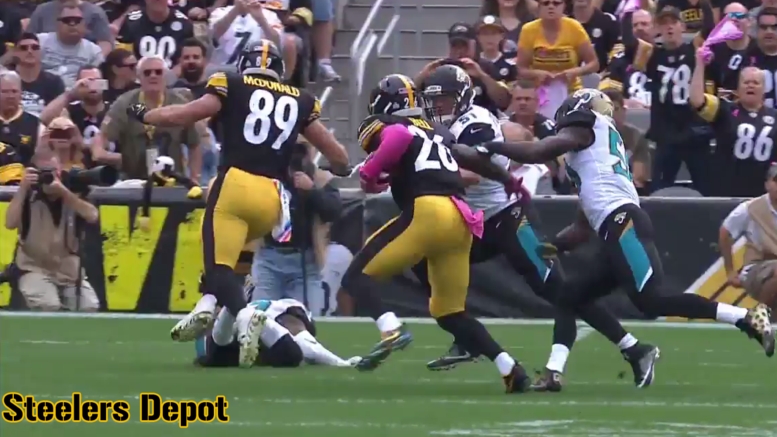 Believe it or not, but football players are actually human.

They may be able to achieve physical accomplishments that only a fraction of the population would be able to even if they were afforded the opportunity to devote their lives to that pursuit, but at the end of the day, they are as human as any of us, subject to all of the shortcomings that are tacked on to being a Homo sapiens.

Part of that is building up preconceived notions and acting upon them accordingly. And Pittsburgh Steelers running back Le’Veon Bell yesterday couldn’t help but consider the possibility that the team’ preconceived notions of the Jacksonville Jaguars played a role in the outcome of the previous meeting between the two sides.

“I think that kind of got us in the first game”, he conceded, saying that the “Jaguars are not normally a good team, but those guys have players this year. They’ve been making plays. They’re in the playoffs. We have another opportunity with them. They know what we’re about, we know what they’re about. It’s going to be a good game”.

This may or may not be used for fodder. Frankly, I can see it going both ways. For the popular narrative that the Steelers ‘play down to their competition’, this is a golden opportunity to take a stand. Of course the Steelers play down to their competition because they don’t take them seriously. Le’Veon Bell just admitted it. That’s why they have to beat the Colts by a last-second field goal.

There probably is some truth to that. But there is truth to that regarding all teams, and frankly, regarding all humans in all walks of life. We underestimate and overestimate persons, places, and things on a routine basis and think little of it. But it’s one of the mental shortcuts that make life easier, and so we accept it.

Still, believing that the Jaguars are generally not a great team is not going to make one believe that it is easier to tackle Leonard Fournette. It doesn’t mean that you are less likely to believe Telvin Smith’s speed, or Calais Campbell’s explosiveness—or even Blake Bortles’ mobility.

The Steelers go into every game that they play confident that they are the better team and that they are going to win. There is nothing wrong with that, and is, frankly, the way that it should be. And frankly, they didn’t lose because of overconfidence. They lost because of a ghastly turnover margin, which was created by numerous factors as simple as a missed blitz pickup.